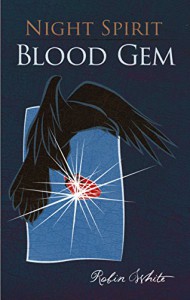 The city has succumbed to darkness since the last of the white-winged angels was defeated. The city grows darker with every passing year and while that brings man new opportunities, the chaos is growing

And one being in the city thinks Raven is the key to changing his.

I always think it is a terrible idea to start a series with a novella. The first book in any series has to introduce the world setting, establish the characters, lay down some thematic elements and tell a good story as well. That’s tricky to get right in any novel, in a novella it’s nearly impossible to fit all that in

It opens with Raven being kidnapped – and he infodumps a little about the world he’s in and what he is. And it is an info-dump, I can’t imagine in any fantasy world that anyone has to infodump about their species and powers. He has been kidnapped by his ex-lovers. Why they are ex is not really well explained, the relationship between them isn’t developed. What we do get is lots of innuendo and flirting and a sudden decision to nibble on the prisoner’s erogenous zones

Honestly, it’s the fantasy equivalent of the pizza boy showing up at the door and the home owner declaring “but I don’t have any change for a tip”.

They do have sex at some point and the sex scene is very long in this very short novel. Also, the dungeon happens to have a ready supply of lube and sex toys because of course it does. It’s a sex scene between a woman and 2 men, 1 man (the protag) is bisexual and the other gay (or possibly had a terrible experience with women – because we really need to keep this trope of “is gay because of trauma” alive, it seems).

Anyway, for reasons that are inadequately explained, his sexy-exes (who have various woo-woo abilities which are not explained or explored, not even their species, because they’re place holders for sex organs anyway) are working for the big bad boss, Lord Infodump.