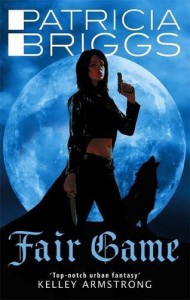 Anna is worried about Charles – ever since the werewolves were revealed to the world, the laws have been enforced with brutal, almost draconian, strictness. And Charles is the enforcer of those draconian laws. The killing always wore at him – but not nearly as much as the deaths he feels are unjust

A serial killer case with the human investigators asking for werewolf help presents an excellent opportunity –Charles can help stop a killer rather than being one, helping the authorities for some good PR for the werewolves (and some careful education) and remove a monster from the streets. A monster who is apparently targeting werewolves and the fae.

This book added a few pieces to the world setting here – elements I’d seen from the Mercy Thompsonseries but get to see much more closely with these books since we’re closer to the decision making. We get to see the conflict that arises after the werewolves are revealed to the world, the difficulties this causes, the way the werewolves have had to change and the problems that has caused. The idea that werewolves are now having to avoid anything that could make them look bad (including loss of control when very young) leads to what is considered an almost draconian rule. There’s lots of interesting political nuggets – like trying to declare werewolves an endangered species as a sneaky way to have them classed as animals rather than humans.

And Charles is the one to enforce it. I would say this is some decent character development with Charles – and it is; after all he is viewed by the werewolf world as the ultimate boogeyman, the executioner who comes for you when you are bad, the monster lurking and that reputation hurts him – and gives him a terrible self-image. This knocks on with Anna because he’s worried about not being good enough for her, that he’s too blood stained or that she will be especially horrified by his death count (especially since, as an Omega, she’s one of the few werewolves who doesn’t face the wolf’s urge to kill).  My only question with this development is that it’s old ground. Charles has been going through the exact same issues since he and Anna first met, so I want to know when he’s actually going to make sufficient progress on them – not necessarily to get over them, but at least not to shut down and decide that Anna is going to think he’s a terribad monster.

What is great development is how it shows how these things can wear on any person, but also how these issues mix with the political realities of the world they’re in. This is a minor theme of the book - with Bran trying to juggle everything and realising that, frankly, he cannot, something has to be sacrificed. And that sacrifice may be his son. The political and the personal are difficult things to balance especially in these fragile times which involves a clot of co-operation with people they don’t necessarily

This all fits excellently with the ending which is both supremely complicated and satisfying – showing off both the injustice of the human justice system and still giving us immense satisfaction of the bady guys being well and truly finished off. But it also fits the political vs personal theme – was the ending a mistake on the part of the actor? (Behold my dancing around the spoilers!) As much as it was satisfying, did they allow the personal to overwhelm good politics? The fact it was maintained or returned to in the book looks good for the rest of this series

There were two elements of this otherwise great story that I didn’t particularly like.

Firstly, towards the middle or middle-end, I got lost. We had a lot of characters from a lot of different agencies, from the wolf pack, witches, we had clues we past crimes and current crimes and relatives of victims – we had a whole lot of things going on that it felt like we jumped and I’m not sure why. Going back I can parse what everyone did and why and where we ended up, but that first reading left me feeling like I’d missed something and got turned round. I want from A to D and had to go back and figure out where B and C went – B and C were still there, but it took a second look to find them.