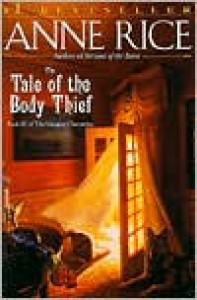 Lestat has become thoroughly disillusioned with his life as a vampire. Isolated, bored and generally dissatisfied he tries to end it all – which doesn’t work out as planned given his incredible power level

When someone makes him an offer he can’t refuse, though he really really really should as multiple people tell him. But since when has the Brat Prince listened to the advice of others?

He agrees to the Body Thief’s proposal – he will swap his incredible vampiric body for that of the Body Thief’s human one – letting Lestat experience humanity while the Body Thief, Raglan, a deeply unsavoury character, plays around with Lestat’s amazing powers

It does not go well.

I love that Lestat becomes human and hates it! Especially since this follows both Louis and Lestat playing the “woe, I wanna be human!” game – and since Louis is probably responsible for an entire genre worth of vampires moodily staring into the night and cursing their immortal super powers. I love how perfectly Lestat sums up just how much better it is to be a vampire, how awesome being a vampire is, how incredible his powers are – and no, getting to see the pretty sunshine does not make up for having to do all the nasty organic things that he hasn’t had to deal with for the best part of two centuries. I love how gross he finds the daily life of being a human. I love how hard he finds it, how painful, how difficult.

Yes, he looks hellaciously whiny when he complains to Louis about it, but it is a powerful moment – Lestat (and Louis) have reached such a power level that being human is beyond their conception. The struggles of humanity are insurmountable tortures to Lestat because he is so separated from them.

The real world parallels for this are many and deep (for example, the number of extremely privileged, wealthy people putting marginalised cultures, experiences et al on shiny pedestals without even beginning to understand what it actually means to be those people) and it’s an extremely well maintained theme throughout.

Are there things about being human Lestat likes? Yes. Is being a vampire an inherently lonely experience? That’s extremely clear as the human Lestat makes his connections (which fall apart when he becomes a vampire) but it has become clear over and over (and is overtly stated in this book) that the few remaining vampires in the world simply cannot get along for any great length of time. Of course there are attractions, but those can only be realised by ignoring a huge wealth of pain and hardship and difficulty that being a human brings compared to the vast abilities of vampiredome.

While I generally find the endless philosophical debates in this series incredibly, painfully dull, I actually really liked Lestat and Gretchen (not so much the fever dreams) with their delving into what is goodness, what makes a life worthwhile, what is a good life. It’s a big, meaty, thought provoking topic which was handled quite well – albeit long windedly. I also liked Gretchen’s point about her celibacy – she views celibacy as a way of ensuring all of her life can be dedicated to helping others without the ties or distractions of a relationship. As her growing preoccupation with her celibacy and desire to have sex grew, she recognised that as a distraction in and of itself and therefore the moral choice was, basically, to scratch the itch. It’s a fascinating moral viewpoint – the whole conversation really works (except for the repetition).

I like the development of the antagonist as well, for all his cunning his flaws are written large – and there’s a lot of thought gone into the whole concept of stealing a body; after all, would we really know how to move a body that is a different shape from our own? Let alone a body with super powers? I imagine, given Lestat’s incredible abilities, the only sensible response at controlling that power for the first time is some kind of terror – like a new driver suddenly behind the wheel of a Maserati.

Then there’s the negative. Firstly, the standard problem I’ve complained about with every book in this series – this book doesn’t need an editor, it needs to be assaulted by a drunk man with a chainsaw who’ll just chop huge chunks of it away quite randomly. Again, this book could have been half, a third as long as it actually is. We had a lot of random Claudia hallucinations that just seem to be there to fill up space. Lestat begins the book all suicidal which we’re told about at length, including his suicide plan… he then gets over it. After an interminable amount of time bemoaning his existence and trying to end it all, he decides he’s done that now and moves on – the whole thing feels like a painfully pointless way to give Lestat a tan.

In fact, the whole beginning of the book is like some kind of test of reader dedication to see if they have the mettle to keep reading. Beyond the Claudia hallucinations, unnecessary recaps and random not!suicide, we have a truly horrendously long conversation between David and Lestat that covers nothing of any real relevance – except maybe to try and tell us that these two are bestest buds ever, even though none of the books felt the need to develop that. Oh and Lestat kills serial killers and romances and kills old people for some unknown reason which, despite having zero plot relevance, required so many many many pages to describe. I also have a repeated notes with a growing number of exclamation marks saying “ENOUGH WITH THE BLOOD REMBRANDT!” I think a full quarter of the beginning of this book is spent on utter pointlessness.

Unfortunately this book moved Lestat from a character I found somewhat intriguing to one I found infuriating in the extreme. If something were to brutally murder Lestat I wouldn’t feel sad, I would smugly declare he got what was coming to him.

Lestat has the impulse control of a small child – no, small children show greater restraint. And not just in agreeing to Raglan’s deal – but in the end with David, in his interactions with Louis, most of what he did as a human, his early book angst, in fact, just about everything Lestat does, he does on a whim with little to no thought of the consequences. And he always has (Claudia is a classic example).

I could handle that – if he learned. If for one millisecond he learned. If he once decided to plan or consider or look back on his past mistakes or if he showed even a modicum of character growth. He doesn’t. Ever.