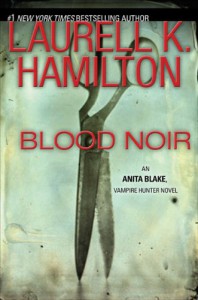 Jason’s dad is dying – he has to go home to try and make amends. And make sure his dad knows how very straight he is.

Unfortunately, a case of mistaken identity gets him and Anita drawn into far more drama than expected. And with the Mother of All Darkness popping up at random to play with Anita, some drama is always going to follow Anita around.

Oh lordy, this one’s a doosey, even by the standards set by this series. Cover me, I’m going in.

The book opens with a heavy wollop of ridiculousness. Jason is sad. He is doubly sad. One, the girl he likes/loves/is in a relationship with has dumped him because she wants to be monogamous (how dare she). Two, his dad is dying of cancer

Also because Perdy (Jason’s ex who is female and near one of Anita’s love interests so is obviously EVIL) is the worst person at sex EVER (unlike Anita) and so boring and pedestrian and limited (unlike Anita – though you may prefer Perdy if you prefer your lovers not to shred your skin to the bone with their nails and not to shriek like a chainsawed banshee while having a seizure at orgasm. You may find these things not sexy. In fact Perdy is so boring in bed she is “killing his soul.” No, really, your lover not wanting to be polygamous and have sex on the television is soul killing). So they decide to really go to town – by having sex not in a bed and using Velcro cuffs (OH HOW VERY NAUGHTY!). If this is your definition of edgy kink then you are more vanilla than an ice cream truck. This stands out as especially ridiculous because one of the many many many many oh-gods-so-many angst moments in this book is how desperate Nathaniel was for someone to push his kinky buttons… and this is it?

This is the opening scene and in addition to be especially ridiculous even for an Anita Blake novel contained all of the long standing Anita Blake stalwarts – long windedness, angst, ridiculous description and even when Jason is describing his issues having to take time out to calm down Anita’s ruffled feathers.

Right with that due warning of the ridiculousness within let us delve into the plot. This won’t take long. Jason wants Anita to go with him to see his dying dad (I’ll get back to why in a bit), this is a moment that will be used in a later book with Micah. In both cases Anita actually spends almost no time at all on the grieving loved one and dying relative (Jason actually begs her not to go chasing issues so he can actually focus on his family for five minutes). Unfortunately, Jason looks EXACTLY LIKE another guy who is up to all kinds of naughty shenanigans and is also son of a US presidential candidate who is in town to get married. Hijinks ensue. And by “hijinks” I mean lots of complaining at said candidates security/press detail, before some actual action tucked in at the very end of the book when it turns out said shenanigans are dangerous (and ridiculous).

This is a plot line that your average soap would look at and say “no, this is far too ludicrous.”

Back to Jason’s issue – see, his dad thinks he’s gay because Jason is short, has female friends and likes dance. His dad is a homophobe so we’re treated to lots of very not fun homophobia in a book that has one walk-on lesbian who appears for maybe 2 pages: Jean-Claude has been put in that “heteroflexible” box Laurell K Hamilton loves so much and both Jason and Nathaniel overtly confirm straightness in this book – what starts out to be some kind of clumsy object lesson on bisexuality instead ends up just being a useful tool for everyone to assert the essential straightness (and it is really clumsy, because they use Nathaniel to assert that bisexuality exists… then overtly label him as as straight). To bring comfort to this dying man Anita agrees to pretend to be Jason’s girlfriend. No, really, this isn’t a bad soap storyline, it’s in the book.