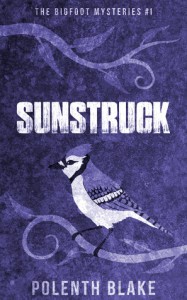 Ben is the new member of the Spokane Ecology Board, after his predecessor was murdered. Of course, it isn’t generally known what the full nature of the job entails – policing and investigating problems with the supernatural community of Spokane. A community Ben never knew about before – and certainly isn’t a part of.

It comes with a partner – Ari. A Bigfoot. She’s hoping this job will earn her some respect from the Bigfoot colony that has made her an outcast – she doesn’t have a great deal of experience with humans. Her predecessor has also been murdered

Both of them face something of a learning curve. But they have to learn fast – whoever killed the people before them may be targeting them next and, with the evidence heavily tampered with, the perpetrator may be one of the few people they need to trust.

Given that, Thunderbirds having a temper tantrum in town seems quite minor.

This is a neat murder mystery – it’s a story with lots of interesting little twists and tangents that unfold as the book progresses at an excellent pace. It has a few nifty red herrings that are thrown in with skill and aplomb, we have some action that’s in keeping with the characters. It’s a good plot and it has some points I really appreciated – like the action scenes not being one-on-one fights (because why going into such equal battles?) and the enemy not being so simplistic as is common place.

The characters are excellent – Ari and Ben bounce off each other, flounder together, annoy each other, try not to annoy each other, fail to understand each other but keep bouncing back and coming together again trying to decide whether to sit down and figure out what happened or to Not Talk About It. They have pasts and experiences and fully realised characters that I just want to burrow through

If it weren’t for the world, the characters would be the best thing about this book. But the world, with the different supernatural groups, hefty amounts of Native American tradition, entirely newly created lore in places sprinkled with politics, tensions and strong connections to themes of colonisation – is even better.

There was a lot of Native American tradition and beliefs in this book and even without the bibliography at the end you can tell that there has been some research gone into them which is always great to see and helped contribute to the richness of this world (along with the development of the Bigfoots mentioned below). The combination and blending of well researched actual tradition and beliefs with really well founded and well made fictional worlds made for a very strong setting

I also like that Blue Jay was used. If you make a pile of Urban Fantasy books containing Native American traditions you’re probably going to run into a gazillion Coyotes, half a gazillion Ravens (and innumerable Skinwalkers and Wendigo – ALWAYS THE WENDIGO!) but this is the first Blue Jay.

I loved the world building of the different mystical creatures, in particular the Bigfoots, because there has been world building. Not just “big people with fur” but a fully developed separate species – they have their own biological differences, their own culture, their own faith, their own different families and ways of living and society and prejudices. These can be big things like the whole explanation of how Bigfoot families are structured or the problems Ari faces as a Sunstruck, but also little things like the Bigfoot needing the chew things to wear down their teeth because modern human food they largely eat is too soft. A huge amount of effort has been put into making the Bigfoots a fully developed people with all the positives and the negatives that that implies (one of my favourite elements is the way they speak English, the accent they preserve because it’s a marker of the people who bothered to teach them).