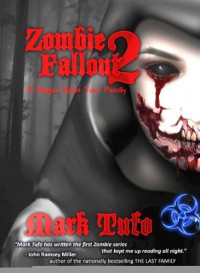 After being rescued from his attic, Micheal Talbot, his family and a few survivors are on the run from the zombies.  What they don't know is that the zombie horde is not nearly as mindless as it seems.  Unlike other survivors, the Talbot's and the people they travel with are being hunted.  At first, Micheal doesn't want to believe this is the case but Tommy's warning becomes dire and his son Justin is starting to show terrible side effects after surviving a zombie attack.  How much of Tommy is still human is something they will have to discover, as the Talbots struggle to survive, even as it seems that their son is looking for an opportunity to lead them to their deaths.  Can the Talbots stay one step of the zombie plague that is determined to consume them.

I actually had to pause before writing this review and not because Tufo's story is particularly complex. He added new elements like zombies being able to move quickly, the dead from Talbot's neighbourhood stalking him and even a zombie/vampire hybrid.  This of course helped to raise the level of peril and added a sense of urgency to each step the Talbots tale.  I could feel the anguish of  Michael when confronted with toddler zombies intent on devouring him.  It was symbolic of a loss of innocence, of a way of life which would never return.  If only Tufo had focused on these elements of his story but alas that was not to be. When Tufo was not overwhelming the story with puerile commentary about farts and various other bodily functions, the story was like an ism lalapalooza.

A Plague Upon Your Family, is easily one of the most offensive books I have read in this genre.  Please keep in mind that I have read a lot of shit.  There isn't a single ism that Tufo didn't engage in in this story, which makes me wonder why Tufo believes that the pain of marginalized people is appropriate fodder for his second rate offensive comedy?  I almost don't know where to begin.

We met BT (read: Big Tiny) in Zombie Fallout.  He is the only Black man among the survivors and of course, he is big and intimidating because well, aren't all Black men? Michael Talbot vacillates between trying to calm BT's ridiculous, ever-present rage and counting on his physical size and strength.  BT is simply angry for the sake of being angry, as all Black men are stereotyped to be. If someone seems even remotely disagreeable to BT, like refusing to drink out of a bottle after he has had a sip from it, it must be because BT is Black. There is no nuance to this character.  He is simply a big Black hulk, who doesn't seem to have a sense for his own survival and is dedicated to Talbot's leadership for some reason I cannot even begin to fathom.  In fact, when BT isn't ridiculously angry, he spends his time propping up Mike Talbot's leadership and self esteem.


Then we have Jen, the sole lesbian of the group.  After being described as a waste because of her lack of interest in men in the first book, I suppose it was too much to hope that her character would improve.  When Jenn steps in to help Talbot fight off the zombies, she's described as "a gun toting man-hating lesbian" (pg 76). It only gets better from there folks. When she is able to move quickly, BT says, "Who would have thought a lesbian would have that kind of speed?"  (pg. 123) Is there something about homosexuality which denotes that one must move with the speed of a turtle? The line doesn't  even make any sense! Lesbians apparently are also more aware as we learned on page 209.

"Do you think lesbians are more spatially aware than your normal female?" I asked BT. "I mean they have to put their own furniture together and shit.  Use a tape measure to hang shelves, that kind of thing."

This actually hits the mark of being both sexist and homophobic.  Jenn never becomes anything more than a stereotype and in the end, died falling off a truck when Talbot couldn't save her.  Normally, I am not happy when the sole member of a marginalized group gets killed off in a story, but in this case, it was an absolute relief because it means a break from all of the homophobia Tufo engaged in.