No Lasting Burial (The Zombie Bible #4) by Stant Litore 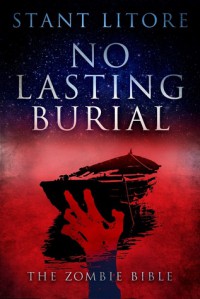 Jesus of Nazareth walks the earth and he keenly feels the pain of the world.  The survivors of Kfar Nahum are a broken people despite following the law.  The dead over ran their small fishing town and in the process killed many and left the living broken. In retribution, those who were bitten and destined to rise with a hunger which could never be assuaged were dumped in the sea. The people of Kfar Nahum invoke the memory of Ezra and believe that they have invoked God's anger by not following the law closely enough.  This then explains not only why the dead walk but why those cast into the sea now consume the very fish they need to survive.

Yeshua makes his way out of the desert lost and confused, aware that somehow he must stop the sound of the voices screaming in his head.  He seeks to feed the people of Kfar Nahum by calling up the fish to feed the hungry but in the process calls the zombies out of the sea.  How will the people of Kfar Nahum deal with this horror again, now that they have lost so much?

To be honest, I picked up No Lasting Burial expecting it to be somewhat quirky.  A sort of biblical tale meets zombies ala The Walking Dead.  It's true that No Lasting Burial does indeed fit the model of a zombie apocalypse/dystopian in the loosest sense; however, the zombies themselves feel sort of extraneous to the story.  Life in that time period was hard, particularly for poor Jews.  Litore didn't need to add the zombies to give us a sense of suffering and the stark nature of life that the average human lived.  The zombies just were over to top. No Lasting Burial feels like an excuse to retell an already familiar biblical story.

I spent much of No Lasting Burial in a state of confusion.  There were parts of the story that were absolutely didactic and I felt as though Litore was proselytizing to me.  We were told repeatedly that Yeshua was the navi (read: chosen one) and this of course was backed up by his miraculous acts, like bringing someone back from the brink of death after being bitten by a zombie and healing the disabled.  Yeshua constantly spoke about his father's house and encouraged the citizens of Kfar Nahum to believe his truth.  If I hadn't wanted to read about the years Jesus walked the earth and the miracles he performed, I could have read the bible.  The zombies feelt like an excuse for Litore to simply convince the reader how powerful and full of grace Yeshua is.