Flesh and Blood by Daniel Dersch, 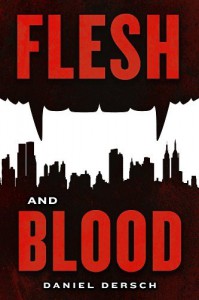 Claire and Amanda are sisters who both live in New York City.  They vow to have a close relationship but Claire's career starts to take off and she finds herself seeing Amanda less and less.  One day, Claire gets a call that Amanda has been institutionalized because she believes that she is being bitten and stalked by a vampire.  Determined to find out what happened to her little sister, Claire begins to investigation.  Let does she know that this will put her up against the Catholic Church who has fought vampire for centuries and make her the alley of a vampire who is the result of Nazi experimentation.

As a protagonist, Claire is very strong.  She absolutely refuses to take no for an answer and always tries to be as proactive as possible.  Even when faced with overwhelming force, Claire is always actively searching for a way to defend or protect herself.  It would have been easy for Claire to place her safety in George's because he is after all a vampire but Claire constantly questions him and even develops plans to ditch him if necessary.  I like that for Dersch, strong doesn't mean turning his female characters into a weapon.

Though Claire is the protagonist of Flesh and Blood, male characters far outnumber female characters. The male characters are not well developed at all and read like card board cut out random bad guys working for a shady organization. The relationship between Bishop and Whitman is particularly confusing. Whitman has been with the organization for many years and this is the first time he has been assigned a partner. I don't understand the level of animosity that he feels for Bishop. Whitman spends most of the book contemplating how he is going to kill Bishop and other than the fact that he has the misfortune of being assigned to work alongside Whitman we are given no justification for his rage.  This took up a large percentage of the story and at the end of the book turned out to be largely irrelevant.

Dersh did give us an interesting take on vampire lore by suggesting Nazi experimentation.  Given the research that they ( read: Nazis) were known to participate in, it gave the story a sense of reality and added reality. Normally, I take issue with people invoking the holocaust but Dersch seemed to make this work.