This Strange Way of Dying by Silvia Moreno-Garcia 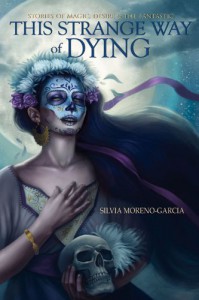 This book is a collection of short stories and it’s rather unlike any I’ve read before.
In some ways I don’t think “stories” is the correct way to refer to these entries. None of them really conclude or have any real ending, most of them only have a little backstory but not one that goes back very far. Even plot is somewhat absent in most of them. What they are more are vignettes. Or photographs in literary form. Each story concentrates on creating a theme and atmosphere and they all do it incredibly well. They’re not meant to tell someone’s story, they’re not meant to advance a plot or even tell a story. They’re there to give us a snap shot into an event or part of an event, a glance into a person or creature’s life, a brief look at a legend or myth or superstition or fear and give us the full impact of that. I don’t think it’s about telling a story, it’s about artistically presenting an image, capturing a moment and portraying a theme, an emotion and a deep, unsettling darkness that permeates each and every one of these stories
And they are all very very good at that. Every story has the best atmosphere. It is creepy with a capital CREEP. What is alien is alien and the settings around Mexico and especially in Mexico City are really powerful. You get an excellent sense of time and place even though they’re only thumbnails in short stories, they’re very elegantly described – not overwritten but not sparse and very much aware that the atmosphere is vital for these stories.
All but one of these stories are set in Mexico and there’s a really good sense of the location in them. Culture, food, location beliefs are all really well mixed and presented into the stories as a natural part of them. There’s no sense of someone forcing inserts or clumsiness or “tour guide” elements where someone really wants you to look at the setting. It’s there, it’s always there, but it’s always there naturally. But more than just place and culture, many of these stories also bring in history, which is fascinating all of itself since so much of this history is so little known or studied outside Mexico. It certainly prompted me to do some reading to find the larger context that created these beautiful, eerie scenes.
Read More
Source: http://www.fangsforthefantasy.com/2014/03/this-strange-way-of-dying-by-silvia.html
Tweet