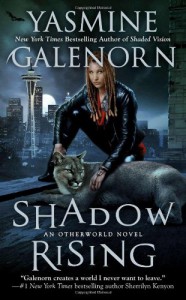 Menolly and her sisters continue their epic battle against Shadow Wing and his quest to bring the demons to Earth and the Otherworld. A new front has opened up in Otherworld, the sorcerers rising up from the Southern Wastes to bring the world to war again.
While on Earth, the Lord of Ghosts has unleashed a torrent of spectral monsters preying on any with sufficient magic to be tasty – but their goal may be far more insidious than that.
And through all this, Menolly has a wedding to plan – and to find out exactly where she stands with Roman, and, through him, where she stands with the vampires as a whole.
Reviewing this series is becoming increasingly more difficult – because I often find myself without anything original to say that I haven’t said about the previous 11 books; they’re all strong in the same way, they’re all weak in the same way, all that changes is the details of how those strengths and weaknesses are expressed
On the plus side we have an incredible rich, broad world. I honestly don’t think I’ve read an Urban Fantasy series that has even close to the varied world that this has. And it’s more than just the standard grabbing an encyclopaedia of world myths and legends and just copying down every name. Every group, every faction has its own history and politics and goals and depths – they’re more than just a word or a brief thumbnail: they’re cultures and peoples and realised characters
The same applies to side characters, very few of the named characters in this book are just names. They have histories and lives and goals and personalities – there’s a lot of fully fleshed out people in this series – not just names and place holders
Together this increases the epicness of this book: there is a real cost to battles lost because people will be lost, people who have been established as having meaning and a presence. There’s also a great sense of the epic brewing because of all of these cultures and forces coming together – either as allies or enemies – each of them throwing their force to the war – but also their history and culture to the battle.
The downside to all this is the books are really stuffed, there’s a lot of exposition, a lot of distraction and this can leave the whole series feeling unbearably overloaded and awfully slow because there’s so much to dredge through before we can even come close to reaching the meta. Especially since so much of the books are unnecessary side plots, recaps or exposition.
Take this book – we had some excellent development of the world building of the vampires, what it means to be a vampire, their origins and their culture. We had some good look into Otherworld History with the southern wars against the Sorcerers and how that relates to them being a current threat and some world building on the nature of magic. This lead to some foreshadowing for the future as well as another front in the battle. The main plot was against battling against Shadow Wing’s chief evil lieutenant in the world and it actually took up a fair amount of the book making it at least a somewhat dominant focus of the characters that is better than in previous books where it felt like an afterthought

On a personal note to the sisters, Menolly  focuses some of her attention on her relationships with Nerissa and Roman, finding where they all fit and restating her dedicated commitment.

This is all good – all of these plot lines advance the world, the setting and the main plot – they’re fun, they’re interesting and they bring the good stuff
Read More
Source: http://www.fangsforthefantasy.com/2014/03/shadow-rising-otherworld-series-12-by.html
Tweet