The Business of Death (Death Works #3) by Trent Jamieson 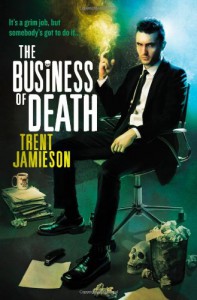 Steve is the last RM – he is the Orcus. He is Hungry Death. He is not just the head of Death, but the very embodiment of it.
And the end of the world is looming closer – a monstrous creature of the void is looming not just in the underworld but in the real world as well. The apocalypse is nigh
Unless Steven can stop it. Which means getting himself together and his life in order and finally working with Lissa and Tim and acting like the head of the Orcus.
Oh, and trying to make peace with the Death of Water who is not happy with Steven, not happy at all.
We have an interesting development in Steve’s character – I’ve complained before that he didn’t seem to do anything in the second book except mope and drink. I can understand why he did because he went through a lot – but then so did everyone else, and there’s Lissa and Tim moving mountains to keep everything together while he… mopes until the big power and plan lands on him.
And this book? We have some consequences of that. He’s still woefully ignorant of his abilities and his dodging that has left him with regrettable gaps in his skills and knowledge – which costs him until he gets himself together and starts working. More, he has lost the respect of many people and, because of who he is, that in turn has reduced people’s morale and faith in him. No-one has a lot of confidence in a boss and world saviour who spends all day drinking and whining without doing anything. Now Lissa and Tim? The other Ankous from around the world deeply respect them – but Steve, the Hungry Death himself, is tolerated because he didn’t get up and get things done. Winning their respect, rebuilding that confidence and turning himself around. I appreciate that – a character who has flaws that he then has to pay for is something I can respect.
Though I do think he recovered from his alcoholism awfully quickly part of that is down to being Hungry Death himself and the wonderful intervention of the death of the sea which was pretty major.
So it’s nice that there was some attempt to address that Steve was a pretty useless article the last book. And that was coupled with some excellent conflicted morality over what he’s done and what he’s become – as well as Lissa and Tim not being patient saints around him. I have a little frustration that I kind of want a book in the middle. Steven is useless last book. He gets called out and sorts his stuff out in the book after. Then in the last book Steven would be running around all epic and awesome and totally kick arse even if he is against an overwhelming force. And we never really got that last bit.
This isn’t just my shallow love for all things epic – and don’t get me wrong, Steve does pull a level of epic here – but the fact that Steve is the complete avatar of Earthly death just didn’t seem to mean anything. Especially since there’s a scene where Steven truly seems to master himself and what he has become – and that sets you up. I read that and think “oh yeah, now it begins….” And it didn’t. Sure he fought and he was powerful but it was… lacking the oomph. It’s like if Zeus came down from Olympus and carved a hole through the enemy with a big sword – it doesn’t matter how epic a fighter he is, part of me is always going to ask “where’s the damn thunderbolts?” There were no thunderbolts. And the scythe of death was just… a scythe. He was a great hero – but was he Hungry Death?