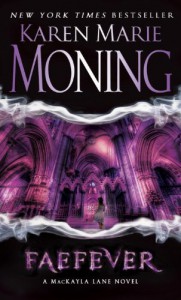 Mac continues her quest for the Sinsar Dubh – but also has to figure out what to do with it if she finds it. When she comes near the book she is unable to act due to the pain – and can she trust Barrons or V’lane, either one, with an artefact of such power?
And things are getting worse, more of Dublin is falling to the Dark Zones and the walls of the Unseeling prison are beginning to crack. If they cannot find a way to patch them before Samhain, then all hell will break loose.
At one point in this book Barrons complains at Mac that she is too passive. Well, I have to give the book one thing, they managed to lampshade what is probably her worst character trait (and it says a lot that this, out of all the other problems, is the worst character trait). Mac does nothing. If left to her own devices she would spend her entire time twiddling her thumbs in the book shop hoping that the Sinsar Dubh comes to her, that her sisters murderer decides to give himself up and that all the fae go away. She spends her entire time moping and reacting. That doesn’t mean she does nothing – but the only reason she ever acts is because someone has forced her – Barrons, V’lane, the Sidhe Seers, Christian – someone pushes her and she reacts. That’s it. And because she’s the protagonist that’s what we get for the whole book – her moping and occasionally doing stuff to react to the random events the various people force her into before going back to moping again.
Which means the book has no overarching plot. What is the book about? Finding the Sinsar Dubh – same as the last 2 books – except she doesn’t actually do anything to find it. So it’s just mope mope mope FORCED EVENT more moping and then all the action (which, to be fair, is pretty damn good) is kind of clinging in the last 8% of the book and ending with a cliffhanger.
Mac’s passivity manages to be even more annoying because the one “active” thing she can bring herself to do is to keep secrets. A large part of this book involves Mac deciding who to trust – V’lane, Barrons or whoever. These are reasonable concerns considering that neither of them are trustworthy and they both have zero respect for Mac. This would be fine if she did something with the knowledge she had beyond actively sabotaging their efforts to find the book. The Unseelie have to be stopped, the book has to be found but she’s not sure who she can trust with the book – fine; but how is it sensible to have the alternate plan “well no-one’s going to get it then!” and promptly stick your head in the sand. Which is basically how she ends the book with all this action – waiting for the worst to come and hoping others can fix it.
Her keeping secrets would also be better if she ever could actually manage it – but she fails completely to do the one thing she’s actually trying to do. Both V’Lane and Barrons easily learn everything she tries to keep hidden, making her one, tiny piece of agency collapse horribly. In fact, that pretty much sums up their treatment of her in general – she’s less than a tool to both of them, neither have any compunction about forcing her, marking her against her will, using their supernatural abilities on her to make her do what she wants which causes her to… mope. She is a passive, helpless, disrespected, badly used and often abused tool. On the plus side, she’s at least aware of this (hence her wariness of both of them), on the minus side, she definitely appears to be melting to both of them despite their abuses – and her main reason for that simply seems to be “they could abuse me even more than they are doing”.
This is perhaps Mac’s worst trait – because it breaks the entire story. It makes the entire book one long mope with endless internal monologues and no real advancement. It doesn’t help that the writing is some of the most painfully drawn out, over-descriptive, repetitive, distracted text I’ve read in a long time – and I’ve read a LOT of drawn out, over-descriptive, repetitive, distracted text. It’s also clogged with completely unnecessary recapping just for bonus funsies.