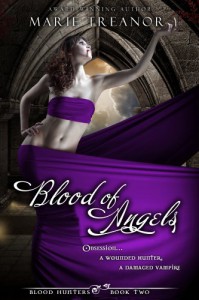 Istvan is a vampire hunter and a brilliant inventor.  Now that he is recovering from an injury which almost killed him, Istvan finds that he has time on his hands to explore ideas he has been tinkering with for awhile.  Istvan begins to wonder about the power of angels and this leads him to the beautiful but agoraphobic Angyalka.  Before they know it, they are caught up in a torrid love affair.  Unfortunately for them both, the new alliance between vampires and humans is about to be tested.  Can their love survive the hatred on both sides?

I like that Angyalka and Istvan take their time getting to know each other and don't immediately declare HAE after knowing each other for a scant amount of time. They both are unsure of where their relationship is going and are highly cognizant of the differences between them.  This adds tension to their interactions. Angyalka is unapologetically sexual and her concerns have to do with Istivan's status as a hunter, rather than any concern about her virtue. There was however a strong element of prescribed gender with Istivan feeling the need to dominate Angyalka sexually because she is physically stronger than him. For the relationship to work, Angyalka had to be made to feel helpless by Istivan and I find that gender dynamic to be problematic.

Like any paranormal romance book, Blood of Angels follows the standard script.  Boy meets girl and there is instant attraction but distrust.  They share a relationship based in lust but then  have a misunderstanding and fall apart, only to be reunited by the very same conflict.  Of course this leads them to a HAE. There is absolutely nothing original about this story and the characters themselves are card board cut outs.

Blood of Angels does fixate on the romance between Istvan and Angyalka; however, there is an ongoing narrative with the other characters in the series.  Elizabeth's pregnancy continues to be a primary concern and the child is referred to as the most important child since Christ.  We see that Saloman has solidified his vampire base, even though both humans and vampires are uneasy about this truce.  I wish that Treanor would slightly expand her world and give more focus on the politics.  The mystical pregnancy alone is not great enough to provide the ongoing world building that this series needs.

Istvan is the male love interest in this story and I have a lot of problems with his character.  When we first met him in Blood Guilt, he was still struggling to get out of a wheel chair.  By the time that Blood of Angels happens, he is moving well, if not always pain free.  As the book continues, Istivan gets more and more of his mobility back thanks to magical healing on the part of Elizabeth and of course the power of love through his relationship with Angyalka.  It is absolutely inappropriate and disableist to have a character living with disabilities magically cured. This is especially true because a large part of the story is fixated on hyper able vampires.  Angyalka is a vampire with an invisible disability because of her agoraphobia but she too quickly overcomes this disability.  She doesn't need any form of counseling; just love.  This means that Blood of Angels has two disabled characters who all too easily overcome the limitations of disability.  It makes me wonder why Treanor  made them disabled in the first place.