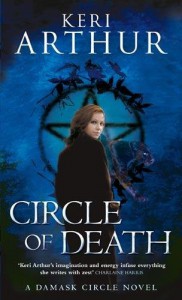 Kirby’s life has just collapsed around her – after a life of constantly running from the threats her best friend Helen can see in the future, those threats have finally found them. Helen, the one person she had in her life is dead – and whatever dark force killed her is now hunting Kirby.
The Damask Circle are aware that there are magical slayings going on and Camille, Russell and Doyle have been sent to investigate; Doyle to guard Kirby while they figure out what is going on. Of course insta-attraction hits.
The force threatening them is far closer tied to Kirby than they imagined – but to fight it they need to dig into her mysterious, and painful past.
I love the Damask Circle world's potential. It’s crammed full of supernaturals, vividly described and handled powers and lots of cunning nefarious plots around the world that need uncovering and foiling. It’s International rescue, with vampires and werewolves.
You could tell so many awesome stories with this world – and I can kind of see them. But they’re obscured so much by a very very dull romance. And that dull romance completely overwhelms any kind of world building (can anyone explain the telepathy between the main characters in this book? Anyone?) so more sexy times can be crammed in
The problem is that things are feeling a little formulaic – both in terms of Keri Arthur’s books and in terms of the Urban Fantasy/Paranormal Romance genre in general
The female protagonist is vulnerable and uncertain (in this book, newly shaken by a murder) – she has had an unhappy and/or outright tragic childhood (in this book, she’s an orphan with an abusive past) which has left her with few family ties or support (orphan) and those either dubious or soon to be uprooted.
She is sexually highly inexperienced (in this book her trauma makes her too uncertain with men), having few past lovers and those being extremely dissatisfactory or outright abusive.
She has some deep, powerful woo-woo but doesn’t understand its full potential and is probably afraid of it and runs from it or avoids it. But with the male hero’s reassurance and guidance she gains more confidence in her power
Despite having deep and powerful woo-woo she is completely ignorant of the supernatural world until the male hero arrives to open her eyes and then play guide (despite every other child in her foster home having woo-woo, she was still ignorant). Her woo-woo will be magic, his woo-woo is more likely to be related to physical prowess (she’s a witch, he’s a werepanther).

Over the course of 10 minutes, they will fall deeply, madly in love and be engaged by the book’s end – after about a week of knowing each other (2 days. Two. Seriously. This is dubiously explained by Doyle’s father and grandfather also proposing to complete strangers – which somehow makes this better). At most.

This obsessive attraction will be accompanied by them lusting over each other in the most inopportune moments, up to and including having sexy times when they really should be getting on with something vastly more important (in this book when hiding from people in a house they’ve broken into they actually have sex. While trying to hide silently).
Read More
Source: http://www.fangsforthefantasy.com/2014/02/circle-of-death-damask-circle-2-by-keri.html
Tweet