Turned (Book #1 In The Vampire Journals) 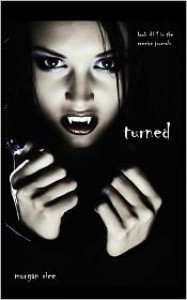 Caitlin is a high school teenager trying desperately to lead a normal life with her absent father and abusive mother. Moved yet again to a new school she tries to find a new balance before having to move yet again – but things are even more complicated now than before. Overcome with powers she doesn't understand and never had before, and a hunger that is all consuming she desperately tries to keep her life working.Facing a confused boyfriend, a new school, and an uncaring parent would be complicated enough – but instead she finds herself over the body of her first victim, hunted by the police and caught between 2 vampire covens, one of whom determined to capture and possibly kill her – to say nothing of Caleb, and ancient and handsome vampire who seems to care for her – and thinks she may be the Chosen One for all of them.I have to say when I read the first page and found that it was a story of a teenager going to a new school, and how miserable it made her and how sad she was about it, I put the book down and had to brace myself to continue. Another story of miserable highschool life with vampires was most certainly not what I wanted to read. Reading on it didn't get much better – she moved from a good suburban school to a poor inner-city one which was presented as grim, overcrowded and generally violent and awful as possible. The other students were loud and violent and ignored her. She felt isolated (but not because she was the only white girl! She totally had black friends) and alone and then she met a boy and he was nice and sweet and played the viola and he was sensitive and kind and we can already feel the teeny twu lub coming on.It was also more than slightly convoluted. Her new love interest is beaten up on the first day of school and she rescues him with her new abilities. On the second day of school she has a ridiculous argument with a teacher other the teacher saying “not acceptable” rather than “unacceptable”. Her brother pops in to say high without any characterisation and her mother just kind of looms in the background as a source of angstYes, I don't enjoy these kind of books and I was seriously dredging through it at this point. Nearly 40% of the book is spent on 2 days of school. I was thiiiis close to a DNF.Read More
Tweet