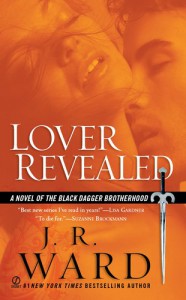 Our latest adventure with the Black Dagger Dudebros follows Butch, the human ex-policeman who lives with the Brotherhood and his long distant love affair with Marissa, King Wrath's ex-shellan who he first met in Dark LoverAfter months with no contact think they both hated each other, Butch is forced to share a long quarantine with Marissa after a painful encounter with the lessers and the Omega himself. They rekindle their old love, but Butch is permanently infected by the darkness of the Omega and fears endangering her and the Brotherhood.Butch also has to wrestle with his own demons – his past, his family and the problem with being a human living with the Brotherhood. As he increasingly feels himself as an outsider and an interloper in the lives of the Brotherhood who, as a human, cannot aid them in their war against the lessers, he questions his place, his continued living with them and even his continued purpose and existence.He certainly questions if he can be good enough for Marissa, pure blooded aristocrat with impeccable lineage and station. But Marissa herself has to find her own place with Butch, overcome her deep sense of inadequacy and faces vampire society's push to sequester all unmated women for their own protectionAn old prophecy has also arisen – the legend of the Destroyer – no, sorry, the Dhestroyer (no, really) – which may be the key to ending the lessers - and the Omega – entirely. But with the darkness of the Omega help Dhestroyer kill him, or lead to Dhestroyer himself being consumed.Yet again, and I have to say it, I am vexed by how little attention the Black Dagger Brotherhood actually pays to the lessers. They go out, they hang around bars and clubs and hope the lessers attack them, or, should a civilian be attacked, they rush to respond as fast as they can. There's very little pro-active battling the lessers and, really, if the lessers weren't almost equally incompetent/inclined to fight each other the fight would probably be over by now. I would love to see them doing more for the actual war, rather than it being a footnote.This book also makes excessive use of that romance trope I hate so much – the ridiculous misunderstanding. Butch and Marissa's relationship over the past 6 months and in this book has been fraught with neither of them sitting down and explaining themselves. Instead we get misunderstanding, hurt feelings and pouting. I've never been a fan of the trope, I have to say.I'm also tired of absolutely everyone in this series having a deeply tragic past. Everyone. All the Brothers, all the women the Brothers love, everyone has a tragic past. Someone open a window and let the angst out.Read More
Tweet