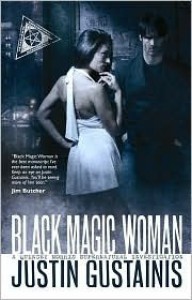 Because I seem to love reading things out of order, I have already done a review of Justin's second book in this series, Evil Ways. In this book, we are introduced to Quincy Morris a sort of psychic investigator/problem solver, Libby Chastain his white witch friend and partner, as well as Dale Fenton an FBI agent, in the Behavioral Science unit. Each one of these characters has a very unique part to play in the story.Someone is killing children by removing their organs while they are still alive. Dale is desperate to find out who is responsible and so he manages to secure the help of a South African cop from the Occult Crime Unit named Van Dreenan. At first their relationship is simply based on the respect that someone gives a fellow professional, but over time and experience, a level of trust is developed between the men. Dale realizes that he must learn to give credence to the possibility of the supernatural and he learns from Van Dreenan not only how real magic is, but that it can have deadly consequences.My main issue with this story is that a significant section of the plot involved a White South African cop hunting down a Black African woman, who was a violent muti murderer. In an extreme display of White male privilege on page 80 Van Dreenan says, "Apartheid was what it was. Neither of us can change history. And now it is gone. And neither of us need mourn it's passing". Speaking about apartheid so cavalierly and then quickly dismissing it's ongoing effects, is a sign of White privilege. Though there is a burgeoning Black middle class, much of the division of wealth in South Africa still means that Blacks are largely impoverished, despite being in the majority. An evil as great as apartheid should never be so easily dismissed, and while Van Dreenan may not mourn its passing, at no time did he acknowledge his personal gains because of it, much like many White Americans continue to fail to realize that though slavery ended some time ago, that they still benefit from unpaid labour of African-American slaves. You see, without infusion of African labour, the U.S. would not be the powerhouse that it is today, nor would these White South Afrikaners be able to live in such relative comfort, juxtaposed to the Black native population. Saying "it was what it was," allowed Whites to simply confess their crimes in the Truth and Reconciliation commission, while Blacks received no justice. How can it be a thing of the past, when justice has yet to be served? Fenton, the Black American cop does not even bother to call him out on his privileged language. When need not make a statement of agreement; silence is enough to imply acceptance.Read more
Tweet