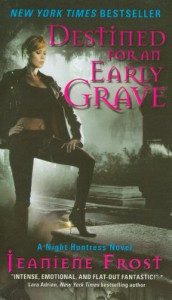 Cat is all settling down for a relatively quiet life. Having defeated the attack on their line and Bones now firmly ensconced as the co-ruler of the line with Mancheres, it’s time for a holiday. But, naturally, nothing is that simple.There is a powerful vampire out there who has his eyes on Cat. Gregor is ancient, more powerful than Bones and is known as the Dreamsnatcher – and for good reason. With the power to invade people’s minds while they sleep and even kidnap them over vast distances, he’s a terrifying enemy.Cat has to go on the run – a flight that literally takes her around the world, but always in secrecy. Scarcely being able to sleep safely, she has to travel in ignorance of where she is – not even knowing the continent she’s on, for fear of Gregor plucking the information from her brain. In endless frustration, she has to leave her rescue in Bone’s hands, ignorant of his plans.Worse, as they flee they learn that Cat has a history with Gregor – a long and intimate history that has been erased from her mind. Both Bones and she have to worry about what happened in that time – and what Cat really felt for Gregor. All the while with Cat’s frustration over Bones’ plans and her acting in the dark to try and help him drive a wedge between them.And if that weren’t enough, the ghouls are worried. If she is this powerful as a half-vampire, what would happen if she were raised as ghoul rather than a vampire? Would she have the powers of both? The answers are worrying people and making them easy recruits for Gregor Last book I felt the series had really picked up. We had tension, action, a lot of lovely world building, an epic enemy and a focus on some powerful, character driven plot.Which made this book rather disappointing.A large amount of this book rests on a huge relationship drama between Cat and Bones – and it’s one I don’t buy unfortunately. I found it pretty contrived and forced with little real or understandable grounding. I can understand that couples do occasionally have huge irrational fights caused by each other not listening or thinking – oh yes I can understand that! – but this didn’t feel real. And even if it were real, it wasn’t a particularly fun read because I just ended up being frustrated and annoyed by both of them for being so pig-headed foolishIt started with Cat snarling and attacking Bones because of the side-effects of her pills, Bones lashing back in bad temper and stress. And then we get the big one – Cat does something that makes Bones think she doesn’t trust him, has no faith in him and thinks of him as less and there follows a good half of the book of estrangement and each thinking the other is cheating on them.Read More
Tweet