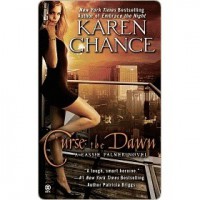 I think that I have a love/hate relationship with this series. At times, the characters, world and plot are absolutely fascinating, and at others, I struggle not to roll my eyes and toss my ereader across the room. Curse the Dawn turned to be more of the same. At this point, Cassie has been the pythia for one month, but she still has not been crowned, because the circle refuses to acknowledge her right to fulfill this role, though the power clearly chose her. At every turn, Cassie is being manipulated because if a group does not want her dead, they want her under control because of the strength of the office that she holds. I must say that I like the fact that Cassie is particularly resistant to being used and continues to hold onto her moral beliefs despite the fact that everyone around her continually encourages her to put them aside. Even when she is under attack, the one thing that Cassie clearly respects is life and she will go to extraordinary lengths to protect it.I wish that I could say more good about Cassie. She is clearly devoted to doing what she thinks is right however unfortunately this too often takes the role of spunky agency. She does not think through her decisions carefully and continually runs head long into trouble that in most cases could be avoided with a little bit of forethought. This makes the fact that Mircea keeps her in the dark about his plans perfectly acceptable. It is hard to be upset with fact that both Mircea and Pritkin are condescending and paternalistic because at times, Cassie clearly needs to be lead around just to keep her head attached to her neck. This of course takes away from the whole strong kick ass protagonist thing that Chance has going on. Having a strong female character should mean that the majority of the time she uses the brain God gave her rather than continually rushing brashly along from one crises to another.With Pritkin the war mage by her side, Cassie travels through ley lines and battles war mages in an attempt to save the world from the return of Apollo, who wants to reassert his power on the earth, by any means necessary. At one point in the story, Pritkin and Cassie change bodies, which leads to some of the most hilarious scenes in the book. How does a woman suddenly transported into a mans body suddenly deal with waking up with an erection that is demanding to be satisfied? Even though this new male body is filled with strength and the ability to heal, it is still male and things like leg hair just don't feel right.Read More
Tweet