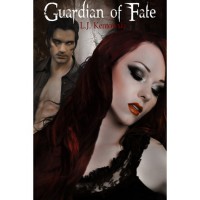 Cassandra is a Guardian, her job is to save human souls. Demons, shadows, stalk humanity, targeting people, hunting them down and then killing them in perceived accidents, their souls then descend to sheol – hell – where they are enslaved as the demons prepare for their war against heaven.Cassandra saves those souls, her visions guide her to the targeted humans and give her the chance to change things, to push the victim away from the crashing car, to pull them out of danger, to save them from the shadow-manipulated chance that would kill them.But her life just got a lot more complicated. The Shadows have changed their ways of working and a new threat is targeting the humans in her visions. Worse, she has come to the attention of a different form of demon – and these Seekers don’t hunt humans, they hunt Guardians. And Cassandra, with her newly revealed ancestry and bloodline is a prime target for them.Her life uprooted, she has to decide what to do – and which of the disturbingly attractive and oddly compelling new men in her life to trust all the while being hunted by demons and discovering that everyone around her was keeping secrets from her – including exactly what she is.Let’s start with some of the problems I had with this bookI don’t particularly like Cassandra, the protagonist. She talks like a strong, independent woman and a decent protagonist – but she doesn’t act like one all the time. Part of that is the circumstances she’s in – her whole world has changed, everyone she knew was keeping secrets from her, she’s learned whole new things about her life, her family and even what she is and has had her life threatened on a regular basis. Given the circumstances, it’s reasonable for her to be a bit shocked and lost – so her crying, even fainting, and running around following other people’s plans are not bad things – but because I haven’t seen her in any other context yet, this is what I see. A woman who cries in emotional stress, isn’t very proactive and tends to follow other people’s plans and leads.Her whole relationship with Hunter is fraught. From the very first moment they met, Hunter was pushy. And that quickly escalated from pushy to outright molestation – repeatedly touching her when she firmly said no. Putting his hand on her thigh, on her bottom, even undressing her when she fainted. He repeatedly forces kisses on her when she says no and in one memorable scene tries to force his tongue in her mouth while she firmly keeps her jaws closed.And yes, she does say no and she does call him out on it not being ok – but still stays with him and doesn’t once aim a swift kick at the yin-yangs or even a slap across the face. And for every line there is with Cassandra saying “this is so out of line, how dare you” there are 10, 20, more talking about how hot and sexy he is, how his touch sends electricity through her and how amazingly gorgeous, compelling and yummy he is. And, of course, they do end up together and declaring their love for one another (after 3 days of acquaintance. And yes, I really do dislike that trope). This ends up making her protests about him constantly groping her seem less “how dare he, that’s pure arseholery, get me a restraining order and some pepper spray” and more “aha, feisty lady playing hard to get.” It’s another “no means keep pressing until she finally is swayed by your awesome masculinity, you stud you” moment. For that matter, I don’t understand why Cassandra so instantly and repeatedly trusts Hunter, even with her life and the lives of her friends and family.Read More
Tweet