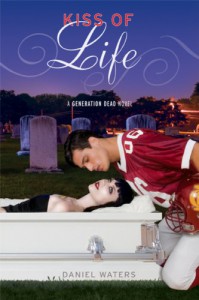 The Generation Dead series is about what happens to teenagers who die and come back to life as zombies. At the end of Generation Dead, Adam had been shot and killed saving Phoebe's life from his former friend Pete the night of the prom. In the aftermath Phoebe must deal with her feelings for both Tommy and Adam as she and her differently biotic friends negotiate a world that is increasingly more hostile towards them.Waters work continues to over written and angst riddled. There are certain allowances that one often makes for a YA novel simply because working with teenagers as characters means that maturity of thought and or behaviour at times is extremely immature; however Waters quickly pushes through that tolerance with an angst level that is enough to drive adults to throw themselves on a bed and cry about not being understood.As with Generation Dead Waters seeks to tackle oppression of zombies by using the oppression faced by historically marginalized bodies as a framework. This of course amounts to appropriation and belittling of what marginalized people face on an everyday basis. In Generation Dead Waters dealt with the word zombie as a slur and specifically discussed reclaiming this word. In Kiss of Life Waters ups the anti by having a traditionally biotic person complaining about the inability to say the word zombie without facing retribution. "I got a detention yesterday for saying the word zombie. Everyone in the room, even Tommy who Phoebe hadn't seen crack a smile since homecoming, seemed to think that was pretty funny. Alish laughed out loud, unmindful of his daughter's warning glare." (pg 28)Of course they laughed. It's not like slurs hurt or stem from a historical method of dehumanizing minorities or anything right? This is specifically why the word zombie regardless of Waters intent should never be considered a slur even in a fictional sense. Then Waters decided to double down on his error by having the character complain about losing his girlfriend because of his relationships with differently biotic people (pg28), and in response the zombies only laughed. This is not a realistic response to this sort of appropriation and anyone who had any experience dealing with a slur would know that. For the first time, we have the introduction of a gay character. Popeye is artistic and the mastermind behind the zombies social protest, though he does at time play second to Tak. We first learn that Popeye is gay when he makes a comment about how short Karen's skirt is and Tak wonders, "if Popeye got away with his innuendos because he was gay." (page 147) We quickly learn that not only is Popeye gay but he is in love with Tak who has hinted that he has no hope. "Popeye, he knew, wasn't really deterred. That was one curse that didn't leave when you died. The curse of hope". (149) I don't know about you but I am pretty sick of the trope that involves a gay character mooning over a straight character. There is no reason why Popeye could not have been given his own love interest. Read More
Tweet