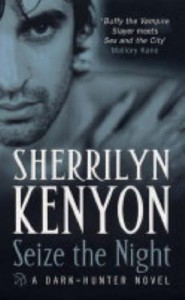 Valerius is a Dark Hunter from ancient Rome who has been reviled all his life. First by his family who despised his compassion and later by his fellow Dark Hunters who loathe him for the actions of his kin – and the actions of ancient Rome. He’s a man with little sense of his own worth, only a dedication to decorum and his duty that keeps him going.Tabitha isn’t very dedicated to decorum, but she does know duty. An empath driven to save others in pain, she has hunted Daimon since before her sisters even realised they existed. Energetic and passionate, she refuses to be bound by convention and burns energy at a rate that is exhausting for anyone watchingTogether, she and Valerius make an odd couple, not least because her family revile him so completely; but Tabitha rarely lets someone else’s opinions confine her.And they do have other things to worry about. The Spathi, the elite, immortal fighters of the Daimons are attacking in droves. Outright war has come to New Orleans and the casualties are mounting – and Tabitha’s own family is targeted. Things only get worse as an old enemy is resurrected and hunts Marrissa, Tabitha’s nieceWith new dark hunters made, Acheron revealing more of his power and the ancient Atlantean goddess of destruction rising – the very city seems under threat.Storywise we have what is now becoming a usual block for me when it comes to this series. We started maybe half the book with a romance that I don’t find particularly realistic, it’s fast tracked, comes with protestations of love far too early, has levels of sexual obsession that don’t seem healthy and is usually sprinkled with a very large amount of angst. It’s usually as we’re reaching the end of this that I’m rolling my eyes, wondering why I bothered with this story and why do I like this series when we spend so much time on a rather convoluted romance and then…Read More
Tweet