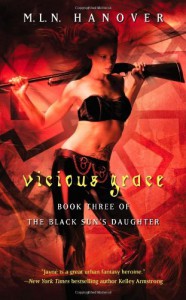 I suppose the best way to describe this book is to say that it is about the loss of Jayné's innocence. With Y.A. you get young protagonists and if the author is good, over a series of books you get to see the protagonist mature to someone who is less angst ridden and sure of themselves. When we first met Jayné she was a college drop out who discovered that her uncle had left her as the sole heir to his fortune. Jayné spent the last year with her associates traveling the globe trying to unravel Eric's secrets. So much of her life plan was absolutely dependent on completely Eric's work that when it became clear that Eric may not have been the man she thought.It all began with a call from Kim, the ex wife of Jayné's current lover Aubrey. Buried under the hospital that Kim currently works at, a creature is trying desperately to escape. Jayné must decide between freeing the creature as her uncle Eric wanted, or entombing it again. Jayné is at a complete loss because it becomes clear that the end of the mission will mean the end of the comfortable little family that she has embraced for the past year and all good faith in Eric. Honestly, I found the entire thing to be angst ridden. We have Jayné struggling to defeat an uber demon, but falling apart over the revelation that Eric caused the end of Kim and Aubrey's marriage, as well as raping Kim and nearly destroying her career in the process. She is racked with guilt for actions that she did not commit, and at the same time worried about losing Aubrey. When she should be focusing on the task ahead, she focuses her attention on Aubrey. I will however through in that I was glad that M.L.N. Hanover did make a point of saying repeatedly that Kim was raped, because she did not consent to what Eric did to her. That was a pleasing surprise, because woo woo is often used to over look acts of violence against women in this genre.Read More
Tweet