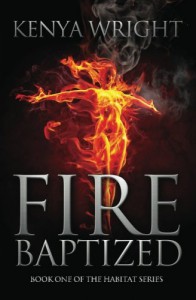 Lanore lives in the Santeria compound in Miami. All supernatural beings are forced to live separate from the humans who guard the compounds extremely carefully, ensuring they can never escape into the human population. Inside, all are supernatural of some kind - faerie or vampire, shapeshifter or demon or witch or even stranger creatures, and all marked with a brand on their foreheads that denote their supernatural type.Lanore wears the cross to mark her as mixed blooded. And as such she is reviled by her fellow supernaturals, a lesser citizen, to be mistrusted and hated and discriminated against. She’s the first mixed blood allowed to attend university (albeit with great difficulty) and she must constantly step warily to try and negotiate a highly prejudiced world.Which isn’t made any easier by a string of murders, one of which she witnessed and the killer made it clear he is aware of her. Faced with a grossly incompetent (and indifferent) human police force, she is pushed into the role of investigator as people keep dying gruesome deaths and she may be next on the list.And of course she has 2 men to dodge between. MeShack the were-cheatah, and old ex who she grew up with with his own issues, and Zulu, a fellow mixed-breed leader of the Mixed Breed Rights movement, pushing for equality and justice that is both demanding, requires great political maneuvering and sometimes disturbing allies.The most amazing part of this book is the world, because wow is it several kinds of shiny. We have a gazillion supernatural creatures, an entire society made up of supernatural creatures, and no humans. We have a history of oppression, we have different laws and cultures and different movements and politics for each of the movements. We have many sided many layered conflicts, a rich and complex society we have so much magic and possibilities. It’s almost impossibly rich and diverse yet at the same time incredibly real and well done that I can envisage this society working this way. I think I’d read this whole series even if it were just a long series of info-dumps.But it’s not - because not only do we have this wide, wonderful world, we also have it presented appropriately, revealed as and when it becomes relevant without tiresome lecturing or screeds of musings to serve as informing us.And the story works well within this world. Lanore isn’t a trained investigator and it is a little questionable why she gets herself involved but it’s not entirely unrealistic. And the investigation itself is rather reactive because there’s so little to go on, but though Lanore often seems to be running at the rear of the investigation, it works because she is a professional and she engages so well with the world while hurrying to catch up. And, in the end, she does get proactive once she has enough information together. Despite her hurrying to catch up, I wasn’t bored as often happens in murder mysteries when they end up chasing rather than investigating, but the rich world and the way Lanore works with it just runs smoothly and makes the pacing work. There are side plots to keep us going with the main plot of tracking down the murderer including Zulu’s work with the mixed-blood rights movements which I definitely want to see more of.Read More
Tweet