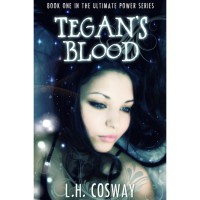 Tegan has just managed to drag herself out of her home, after weeks of her life being on hold in the aftermath of her boyfriend killing himself, leaving her bereft, in pain and grieving, unable to face the world.But she can’t just work her way back into a normal life – because she is special. Or something about her is – and both the city’s vampires and warlocks are desperate to find out exactly what that is. Which is, to say the least, not a comfortable place to be in, especially when you didn’t know that vampires and warlocks even existed. And even more complicated when you consider that vampires and warlocks are not exactly on polite terms with each other.Throw in some vampire slayers, a vampire who is all too attracted to Tegan and a returning monster that everyone thought was long since gone and things get very confusing indeedIt is hard to tell a vampire story these days and manage to bring something unique to the tale, indeed a lot of the supernatural worlds has now been heavily covered in many variations. But I’m still surprised at what new angles new authors can bring and this book is definitely one of them. The concept of Tegan being special but without any particular powers is still relatively rare in a genre that has legions of super-powered protagonists. Her power puts her at risk far more than it benefits her.We have a world that has magic and vampires – and dhampires which could always do more exploration. As well as an interesting take on where the lines are drawn and how the politics lie. It’s also interesting to see vampire Slayers fully integrated into the supernatural world rather than at war with the entirety of it. I also quite like the nuance of the Slayers. We don’t see vampire hunters as evil monsters persecuting the poor misunderstood vampies, but nor do we see them as righteous crusaders battling out to save humanity either – similarly with the vampires. They’re neither poor misunderstood, sad angsty creatures (in fact, there was no vampire angst at all!) but nor are the unabashed monsters. It also seems to have an interesting magic system with actual rituals and rules being carefully planned out rather than just hand-waving, magic words – ta-da shinies!Read More
Tweet