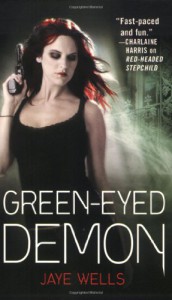 This book could really be described as the evolution of Sabina. She is forced to consider her true feelings for the mage Adam, confront both her grandmother and her magical powers as well as the fact that despite her shoving everyone away from her, she is really a member of a team.When last left Sabina, her sister Maisie had been kidnapped by Lavinia and the mage society was nearly destroyed thus making it difficult for them to go on the defense let alone offense in the coming war. After making a deal with Tanith, Sabina, Adam and Giguhl head off to New Orleans to save Maisie. There they meet with Zen a Voodoo priestess who is part mage and her friend Brooks a crossdressing fae. Sabina begins her search for Maisie but like all things in which she is involved, this journey is not simple. She must deal with werewolves, mage politics and even ghosts from her past.To make matters worse, Sabina realizes that her grandmother intends to release Cain, the father of the dark races. This revelation forces her to realize that everyone she has come to love is at risk. Though used to anger and hate, love is a brand new emotion to Sabina and she is uncertain of what to do.As with the other books in this series, Green Eyed Demon is fast paced and hard to put down. More than ever, this story makes one root for Sabina and a happy ending that she deserves. Along the way, Wells introduces us to a unique cast of characters though there are quite a few problematic portrayals, as well as extremely problematic language.One of the most interesting characters in Green Eyed Demon is Brooks/ Pussy Willow, a fae cross dresser who was raised by human parents. Wells goes as far as to suggest that Brooks fae identity was closeted, which is highly problematic and that coupled with the fact that Brooks later chooses to identify solely as the feminine Pussy Willow rather than a male makes him a part of the GlBT community. "He said, I'm a changeling. My fae parents left me with humans right after I was born. I was raised as a human kid until it became obvious I wasn't like the other children. I tried to hide it for a while but then I couldn't deny it any longer. Unfortunately, my human parents weren't too thrilled when I came out of the faery mound, so to speak. They kicked me out when I was fourteen." [page 69]read more
Tweet