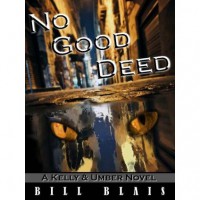 Kelly McGinnis was the typical suburban mother of two with a husband with Muscular Sclerosis. On the same day that she was laid off from her job as an administrative assistant, Kelly discovered the existence of demons when interrupts what she initially believes is a case of police abuse. It turns out the man who had claimed to be an officer was actually a member of a hyper secret demon hunting group. When Denis, the leader of the group offers her a job, she is doubtful at first but with mounting medical bills and uncertainty in the job market, Kelly decides to give demon hunting a try.The discovery of demons it turns out is only the beginning of Kelly's revelations. To even begin to conceptualize how the world is ordered, she must begin to consider outside of her previous narrow Euro-centric point of view. What if the hell of Dantes Inferno exists along with several other versions? What does one do with absolute evidence of evil but no proof of divine good? If there is no evidence of a divine good then who do we define what is bad. Kelly is forced from her modernist way of thinking to consider that perhaps the world really is both/and rather than either/or.Having a husband with a disability makes medical coverage and absolute necessity for the McGinnis family and so when she is told that the group which she has joined is doing harm rather than good and that demons are not necessarily evil but acting out their nature, Kelly must weigh the needs of her family against doing the moral good.There are a lot of large questions explored in No Good Deeds but if you have already taken a first year humanities course then you have covered all of this already. Though Kelly was new to the concepts and questions raised, much of the time, the conflict was presented in such dry prose, I wondered whether or I was reading a boring college text or a fantasy novel for entertainment. The moments with her family were meant to add a lighter side to the story but they were so cloyingly sweet that it was impossible to see their interactions as normal. Everyone in Kelly's life seems to live to support her. Her sister is practically at her beck and call for her babysitting requirements and this is justified by Jen repeatedly saying that she has no life. Kelly's interaction with Shawn, her husband, is just as ridiculous in its perfection. A supportive partner is one thing but anyone in a relationship for any length of time is aware that there are moments of irritation and even small inside jokes between partners. None of this occurred in the book and instead we were treated to night after night on the bus cuddling over ice cream, while Kelly angsted about lying to Shawn about her new job.Read More
Tweet