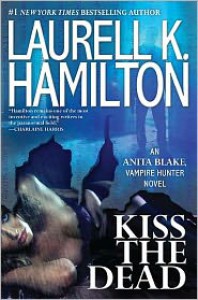 On the plus side, this book managed to get past half way before the sex scenes started. Ok, once they started they were pretty much chained, sex after sex after sex, but we did manage to go a full half book without unnecessary, excessive sex scenes.On the minus side we didn’t have much to fill in the gap. The overall plot is a group of vampires who think they can live without a master and they’re being ornery about it. But this plot is a pretty minor point. We start with one battle scene and clean up that lasts for 30% of the book – nothing is developed or even introduced there. It’s just 30% of fight followed by policey-type things and then later in the book the plot raises its head, waves, and then goes away after, oh, a paragraph until the finale when you remember that there WAS actual plot there – and that tops off the last 10%. Well, not even that.The rest of the book? Angst, issue, angst. Asher’s angst over everything. Anita’s angst over Cynric being 18. And lots of other really pointless relationship angsts between side characters we barely know (what is frustrating is while we’ve been having new characters introduced left right and centre there are apparently new wereleopards in town – Anita’s core animal group – and we don’t even look at it).But the main content of this book? Filler. A lot of it down to the really drawn out righting – everything is ridiculously over describes, the same conversational points are repeated with different actors, Anita chases her own internal monologue down the same rather tiresome rails. In one moment of almost issue exploration Anita considers whether she is a monster and what that means – both supernaturally and morally. Then she has a conversation with Larry where he accuses her of being a monster. Then she has a conversation with Zerbrowski where she says she isn’t. Nothing’s developed beyond Anita’s first internal musings, we just go round the ride 3 times. And while I’m very happy that vampires aren’t considered the same as humans, which is a common problem with urban fantasy (especially when it comes to appropriation) at the same time, her “end justifies means” was very broad.But the main reason I say filler is the huge amount of Chekhov’s junkshop we were treated to – in fact, some of them I’m going to paraphrase below because I can resist the sarcasm no longer:Anita: Why hello there bit part police officer, you’re not going to play any role in this book?Bit Part: nah, I’m just a walk on side characterAnita: Great! Let me describe in excruciating unnecessary detail!Bit part 2: And me!Anita: why yes, Let us waste 3 paragraphs unnecessarily describing you as well!Bit Part 2: Sure, but I have some relationship issues, complete stranger Anita, want to discuss them in the middle of this crime scene?Anita: Why yes, yes I do. Let us spend 2 pages discussing your relationship with your girlfriend because this is totally relevant to the story.Anita: And now I will telepathically talk to Jean-Claude across the cityJC: hello, ma petiteAnita: Hush JC, you’re interrupting my unnecessarily detailed description of your clothesJC: Oh… finished yet?Anita: Not yet. Almost. Working on it. Now working on the eyes. There, done.JC: Can I talk now?Anita: So long as you keep it brief. This plot thing is getting in the way of my unnecessary descriptions.Read More
Tweet