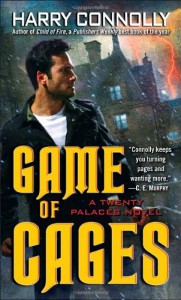 In this book, Ray Lilly is picked up at his working class job by Catherine because the twenty palaces society has work for him to do. She is not impressed to drive an hour out of her way to pick a wooden man. A big auction is happening for a predator in the tiny town of Washaway and Ray and Catherine are tasked with finding out the details of what is going on.As to be expected, the situation quickly escalates and Ray becomes a one man rescuer once again. Someone has to save the town from the sapphire dog who has made pets of most of the town's residents causing them to kill each other so that it can feed on them. The sapphire dog creates feelings of love and adoration in its victim when you look at it and marks you as belonging to it when it licks you. Because of the power the sapphire dog wields a primary - a powerful sorcerer, who has actually been on the hit list of the twenty palace society for quite some time will stop at nothing to possess the sapphire dog and has used magic to make it impossible for anyone to leave town or call for help.We do briefly see a return of Annalise towards the end of the book. Ray is relieved to see her because he knows that he is in over his head and yet once again, Annalise is not around for the final showdown. Though all he has is his ghost knife and known of her power, Ray is able to defeat the primary that Annalise lost to. Uh huh. I don't understand the point of repeatedly suggesting that Annalise is this all powerful being, only to have Ray save her again. If you don't actually follow through with a display of power, telling us about her power is pointless. It feels at this point more like Annalise is Ray's wooden man than the other way around. This theme is somewhat relieved by Catherine who when kidnapped does manage to rescue herself before Ray can do his prince charming to the rescue routine; however, once again when the action happens, Catherine is nowhere to be seen. Ray sends her away because she is a mother of two small children. Read More
Tweet