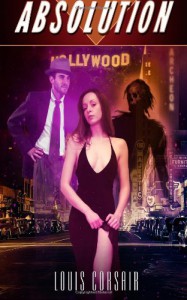 Adams died in the 1950s. When he was alive he was a detective, not just a detective, but a poster child detective straight out of film noir, every cliché faithfully followed. His afterlife was less than ideal, having died with corruptive sins on his soul, he was banished to the Abstract realms where the Enigma tested him over and over to try and give him a chance to ascend and join the collective whole. It was better than the damned in the pit, but even so Adams was becoming desperate as his ascension is stalled and he risks dissolving into shadow.But the powers that be have a task for him. The son of a Pit Lord has been killed on Earth – not just killed, but his soul has gone missing as well. The Pit Lords don’t trust the usual enforcement arm of the Process, the Enforcers, to investigate the death – so the task falls to Adams. Only he only has a day to do it in. And he’s 60 years out of date.Not only does he have to get up to date quickly and delve into the very depths of the Hollywood sex trade, it also becomes apparent that the conspiracy is far deeper than he imagined, going up to the very top of the Process and an actual civil war between the entities that control the Process may be on the cards – if the Process itself and the very structure of the afterlife isn’t irrevocably changed. And, on a personal note, it’s a plot that comes round to touch his own afterlife, and that of his loved ones.It’s a wonderful game of who to trust, find the red herring and see what the true plot behind this death – or deaths as the body count rises – truly is.This book is genuinely unique – and that’s a rare thing in the genre where so many books seem completely formulaic.The world, with the different echelons of celestials each with their own remits, is not something I’ve seen before. Even the method of the process with the different factions fighting and sniping at each other, is fascinating. I love the rivalry between the pit lords and the enforcers and the really real sense of conflict and tension brewing between them all. I also like that we have a lot of world hinted at – with an original goddess and a nod to the mind set of the absent leader of the council.And the world is challenged, even the nature of torturing the souls in the pit progresses from “they get what they deserved” to a realisation of how many of them were just in the wrong place at the wrong time.Read More
Tweet