Pulse: Beneath the Sanguine Moon: 1 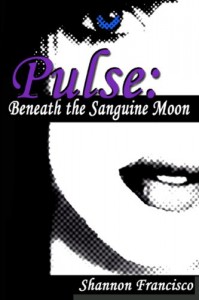 Every once and awhile despite our best intentions, we come across a book that for various reasons, we simply cannot finish and unfortunately, Pulse false into this category. I kept waiting for the book to go somewhere, but it seemed irrevocably lost in the inane. There was absolutely no sense of pacing, or any indication that it would ever verge away from insipid blather into a real plot.The characters all presumably had to be at least 21, as they were legally drinking in a bar, but they spoke like they were 14. I could tell that Francisco was going for edgy and slightly counter culture, but the writing fell flat time and time again. It further didn't help that Francisco introduced us to a plethora of characters, which quickly became hard to follow because there was little characterization, which made all them all sort of morph into one. We got tiny details about individual characters but they were nonsensical facts, which told you absolutely nothing about who they really were. Some of the relationships were explained with flashbacks, but the transition was clumsy and poorly written.The main character, Skylar Roth, is one of the most irritating protagonists that I have come across in a long time. Much of her time seems to be spent either angsting about her ex boyfriend, or her current boyfriend Alekz. I am going to stop for a second to ask what the point is of taking an ordinary name like Alex and spelling it differently is? It's still going to be Alex. Skylar and Alex of course have their own relationship angst when she discovers him levitating one day. She then spends the next twenty-four hours obsessing, calling and texting him. She is further insecure about any woman who could possibly find Alexz attractive because other women are the competition. It is absolutely impossible for Skylar to have faith in Alekz's fidelity and rumbles instead about girls needing to hop off her boyfriends junk.We did get a mention of a lesbian co-worker, but of course she broke the heart of a straight man over a year ago and he has not gotten over it and she is being stalking online by a girl she dated. Despite the horrendously bad world building and characters, I probably could have made my way through this book if it were not filled with so many damn anti woman messages, with a little fat shaming for seasoning. Item number one, smelling something terrible in the garbage is not like being raped. Anticipating getting wet in a storm, is not a justification for invoking rape.Read More
Tweet