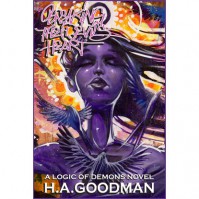 Stewart and Leyla are Observers, having turned down their chance to become angels. Not because they aren’t good and don’t want to fight evil – far from it. But angels labour under far too many rules and restrictions – they intend to take down Hell by any means necessary.Hell has restructured, gone are the fiery brimstone pits and halls of the damned – now it’s cubicles, rows and rows of cubicles and officers – a corporate Hell where souls are bought and sold on the trading floor, where demonic telemarketers infect the brains of humanityAnd teams of sales demons go to all parts of the world to peddle their Infernal Formula.For Stewart and Leyla to bring down the Company, they need to find out what this Formula is and how to defeat it, along with the mysterious demonic Ponzi scheme. It’s a task that takes them into the depths of the Company and draws them to witness scenes of human evil – and hope – throughout history as they try to discover what drives humanity to such evil, trying to discover the very nature of evil and, through that, the antidote to it.But not only are the answers far deeper – and more frightening – than they imagined, but we’re quickly plunged in the middle of plots within plots and a conspiracy far more cunning than I ever imagined.This book is fascinating in so many ways, in particular in the way it makes you think.Layla and Stewart’s quest to bring down The Company and end evil altogether leads them through scenario after scenario that truly does explore the nature of good and evil. We have some truly excellent consideration of the effect of time and place and culture on evil, raising uncomfortable questions about whether we, if we were brought up at that time, in that place, would commit the atrocities that so shock us through history. It raises nuanced and detailed questions about our white washed views of history – how the atrocities of our enemies often stand up starkly in our memories, but the atrocities we have committed, our culture and our society has inflicted, are so often justified, excused or brushed over as somehow less damaging and less atrocious.It also has a deeply unflinching examination of the atrocities of the past. It’s graphic and it’s often disturbing – but if you’re going to examine human history, a history filled with war and torture and genocide and hatred, it should be graphic and disturbing. Not being graphic and disturbing is to ignore just how graphic and disturbing history actually is.It’s also fascinating to see how this book examines the role of culture – and intolerance of other cultures – as the foundation of evil behind so much genocide. It has a very telling line about the only way to stop it is to “make apple pie taste bad” as generations of people fight, kill and slaughter in the name of their own cultural symbols. A person’s way of life being dominant is more important than someone else’s actual life.And, of course, it very very powerfully presents the idea that there is absolutely no need for demons to make people do bad things. We see demons urging people to evil, but we see equal – or worse – evil acts perpetuated by people who have no demonic urging at all. From the lowest level selfish crimes to massive scale atrocities – humanity is the source of evil acts and the whole “Ponzi scheme” relies on thatI think it fails a little more on the question of “ends justifies the means”, there’s some attempt to label this as questionable and wrong including pointing at the various ways it leads to evil. But at the same time the protagonists repeatedly engage in “ends justifies the means” behaviour, excusing and using torture when necessary. They may feel guilty and questionable about it afterwards, before or during, but they still do it and it still pays dividends for them – even as they chant “torture doesn’t give accurate information” they still do it. However, when they do do it is often for emotive and revenge purposes rather than information gathering – I don’t think at any point torture is used to effectively extract information, which is something.Read More
Tweet