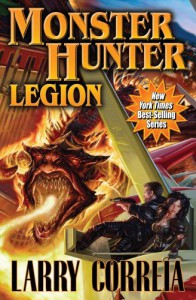 Z and his fellow hunters are attending the first every International Hunter Convention in Las Vegas. A unique, happy opportunity to network with fellow hunters, check out the shiniest new toys and hear about hunting techniques from all over the world. And have a brawl that ruins the dining room, but that’s a side point.That’s before Special Task Force Unicorn, the government organisation that uses the supernatural rather than just destroys it, calls with a job for them. There’s a creature on the loose that needs killing – but the bounty seems unnaturally high for the simple kill they find.Except they haven’t killed it – they’ve brought it back with them to the convention. A creature released from Decision Week, a time when the US was exploring ways to use the supernatural to end World War 2, and it’s a being every bit as bad as you can imagine. Hunters have lots of experiences to fuel those imaginations.How do you fight an intangible force that can throw absolutely everything at you and can come back from the dead? And how much can they lose before they stop it? More – how does this link in to the sinister pattern all the Hunters have been seeing, a vast uptick in terrifying supernatural activity around the world – all suggesting something big is coming. Something apocalyptic, if you listen to Z’s father.A large part of the attraction of these books is the glorious action-movie feel to them. Sometimes you just want to read a book about blowing up the gribbly things with lots of explosions. It’s not exactly the highest or more sophisticated desire, but it still makes them pretty fun reads.But it would be a mistake to dismiss these books as just being a mix of gun drooling (which I don’t care for) and massively impressive, epic fight scenes. There is a long, sustained meta-plot that has been developed from the very first book. The story keeps growing, the world getting richer and more and more characters are added to the mix, each of which add their own pieces to the overall story. This isn’t just a “see bad thing, blow up bad thing”, every bad thing they blow up adds more to plot and adds new allies and new players.Even the story of this book itself is as much a mystery as it is a survival horror. The monster isn’t something that can be simply blown away with a sufficiently large gun. Tracking it down, discovering exactly what it is, exactly what it can do and how something like that can be stopped while sparing as many lives as possible is not even slightly simple. It’s also a story full of well written emotional content. Z’s worry about his wife, about the people he cares for are very well written and carry a lot of emotional impact. It adds a level of tension to the story that is exceptional – especially since so many stories rely on creating menace for the protagonist who, in general, we know is going to survive. You can still create fear and tension that way, but it’s hard to do. By creating not just threat for Z, but also for his loved ones – real, fascinating characters the reader is already strongly invested in – then that tension is really well maintained since any of these characters could die.Read More
Tweet