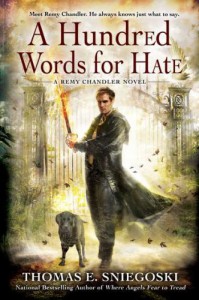 Adam, the first man, is breathing his last, even his extremely long life is coming to an end and he has one dying wish – to be buried in the garden of Eden, a wish that his descendants, the Sons of Adam, wish to make real, even if they have to consume the fruit of the Tree of Knowledge itself to bring Eden back to EarthUnfortunately he’s not the only one who has designs on the garden. Before Eden was sealed, Lucifer sought to use the garden as a beachhead from which he could invade Heaven – prevented only by Remiel – Remy Chandler – sealing the garden. Worse, someone else is abusing the garden – possibly even killing Eden in the process, to use its divine power to their own dark ends.Remy Chandler has a mission with the remaining Sons of Adam to try and find the Daughters of Eve who have the second key to opening the gates to Eden. But they do so under constant attack from the garden’s raging and insane Cherubim guardian – and all of their actions may be being directed by a far older, far greater puppet master.In this time of conflict, a new dark force may be rising, the Shaitan, a creation that may be far worse than all the legions of Hell.This story continues to bring the epic. The world in the balance, fate of humanity , good vs evil, the whole nine yards of epic storytelling with everything riding on the outcome. This is one thing this series has always done well – and this is no exception. The sheer amount resting on the actions of the characters was never lost or distracted from and always forefront in all of the action since then.Part of this means not having any side plots – that can make stories linear but this managed to tell the story from several points of view with different aspects all moving together. So, by following Remy and his investigations, Francis in Hell and Mulvehill with Fernita it prevented the story being linear while making sure it didn’t deviate off the importance of the main plot line.The action scenes were well written, exciting and truly got a sense of the forces involved, including the awesomeness that the angel’s represent and the power and fear that goes with them. This is difficult to carry so consistently and especially difficult to keep fresh with so many different action scenes throughout the books. It keeps being exciting, keeps being fresh, keeps being fun to read. The pacing was excellent, without the down times for angst or distractions that bothered me in previous books – everything was relevant to the story and the plot of all 3 storylines moved forward together, intertwined and naturally flowing from one to the other.I really liked the insights into Francis and Fernita’s past, again, without derailing the main story or detracting from the epicness of it. It added a much more human element to Francis as we saw what he was pushed to do to seek redemptions. It’s nice to see him as more than a repentant angel who kicks arse.Read More
Tweet