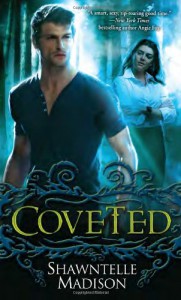 Natalya Stravinsky lives in South Toms River, New Jersey and works cataloging antiques, having been forced to leave behind her dream job in New York. Natalya, is a werewolf but unlike the rest of her family, she is no longer pack, after being thrown out when the alpha discovered that she has issues with anxiety and OCD. To make matters worse, though she still spends time with her family, she often feels like an outsider at family events and they are no longer close.Natalya developed a routine for herself going to work and buying Christmas decorations, which she comes to see as her friends. Though she is lonely at times, she is getting by, until her ex boyfriend and heir apparent to the local pack Thorne moves back to town. Now she is constantly hoping to get a glimpse of him. When her friend Aggie shows up looking for a place to stay, Nat reluctantly opens her home and in the process, creates a widening of her boundaries. This leads to her going on her first day in five years, buying new clothing and even restarting therapy, where she meets a wizard named Nick. Chemistry quickly develops between Nick and Thorne, but she is not sure whether or not she is ready to move on with her life.Things are are really starting to look up for Nat, until the Long Island werewolves decide that they want the territory of the local pack. Nat approaches the alpha sure that she can help but is quickly rebuffed and shamed. Things escalate, when she becomes a target and her family is attacked. Nat is scared and unsure but loyalty forces her to find the strength that she needs to fight.There were times when I felt that Coveted was overwritten because Madison included details that were obviously extraneous, yet I was completely drawn into the story and found myself rooting for Nat. There are a lot of werewolf books on the market, but Coveted is absolutely unique. Nat is neurologically atypical and so is every character in her therapy group. Often in urban fantasy, the supernatural element spends time whining about how oppressed they are, but Nat really and truly is oppressed in a real world sense, though she is a werewolf. Nat has to negotiate abelism in her community and is heavily stigmatized. Without a doubt, Madison's treatment of disability is the best I have read in the genre to date and as a disabled woman, I greatly appreciated the inclusion.Another aspect of Nat's disability that I found fascinating is the fact that she is a hoarder. Nat tries to deny this because she is extremely conscious of having everything as clean as possible. She knows that the fact that she cannot stop buying Christmas decorations and storing them in boxes all over her house is a problem, but when she is stressed, or feeling down, she simply cannot stop herself. Madison did an excellent job detailing the compulsion behind her actions. Where she kind of went off the rails was when she revealed that Nat's great grandmother was a hoarder and her family assumed that this was something in the gene pool. Yes, there are generations of hoarders; however, it is usually passes from generation to generation when there is a shared living space. It doesn't just hop generations.Unfortunately, there were no GLBT characters in this story. Though part of Coveted takes place in small town New Jersey, the rest is set in NYC and it makes absolutely no sense that Madison couldn't find room to be inclusive on this front. This is common to the genre, but it is never acceptable and particularly so in such a diverse city. Another issue of lack of inclusion is the fact that there was only one person of colour in the story. We are told that Raj is an Indian God, but we don't learn anything about him. Nat meets him in therapy and we learn less about him, than any other character. It made me wonder if Madison didn't want to do the research involved with writing a true back story for Raj. Furthermore, calling him an Indian God is so very vague. It is particularly troubling because Coveted falls squarely under the trope of having a magical diverse world, yet a humanly erased world.Read More
Tweet