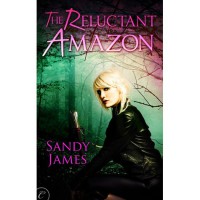 Rebecca is a sensible woman, a teacher and she’s about to get married. Or was, anyway, until her husband got cold feet at the altar and a strange Scotsman showed up in the humiliating aftermath to whisk her away to a new life.With barely time to adapt, Rebecca finds that she’s an Amazon, empowered by the Amazon’s patron goddesses with the power of Earth and chosen to defend the world against various supernatural threats. More urgently, she also learns she has been tapped because the last generation of Amazons has gone missing – or died.Rebecca must struggle to learn the fighting skills that are essential to her role – but quickly finds she is not as physically adept as her sisters nor as fast a learner. But with Amazons to find and the undead to fight, she doesn’t have time to learn slowly.And even that is complicated by her teacher, Artair the sentinel, who is compelling to her in ways that go beyond being teacher.There was a lot of really excellent potential in this book. Yes, 4 warriors dedicated to the 4 elements has been done before, but there was a lot of unique twists to it, with each elements having powers above and beyond what you’d expect. The idea of demigods being evil beings who have the ambition to rise to become gods no matter what is intriguing as well as the various monsters and spirits that serve them and the gods who oppose themIt’s well written as well. The pacing is tight and regular, keeping the plot moving and not dwelling or getting bogged down anywhere but nor did it rush through things and leave it vague or hurried. The world building balance was also excellent. Often with a supernatural setting it is far too tempting to dump all of this wonderful world you’ve created onto the page whether the reader needs to know or not – and it really bogs down a story. This only ever gave us the knowledge we needed to understand the story, explaining what was necessary and leaving the rest as intriguing clues. But, despite that, the world building felt sparse.The world building felt sparse because it gave us just enough to understand without giving us irrelevant information. Sound like a contradiction? Well, the amazons have these powers, the gods these roles and this presence, but we didn’t get a story about them. We got a story about Becca and Artair falling in love. About Becca worrying she wasn’t becoming a good warrior fast enough. About Artair thinking Becca was sexy but wanting to quit as Sentinel. Of Becca thinking Artair is sexy and wishing he wouldn’t go.In other words, there’s this wonderful world and wonderful pacing and an admirable restraint against drowning us in unnecessary information, and it isn’t really used.
Tweet