Her Own Devices (Magnificent Devices #2) 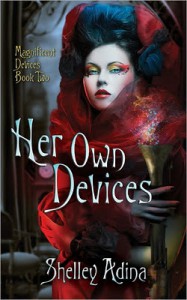 Lady Claire is back with her horde of children, defending her patch of London with lightening and bombs, if necessary. But far more fraught than keeping her squad of gamblers safe on the mean streets of London is negotiating the pitfalls of marriage.Because her erstwhile employer and frequent foe, Lord Selwyn has proposed to her. And it seemed like such a good idea at the time that she found herself saying yes. Unfortunately, it’s never that simple – especially since she still holds on to the desperate ambition of attending university and becoming and engineer, something that becomes all the more ideal after the help she gives Andrew in his device for improving coal.Despite her unorthodox successes in the lab, she is denied the kudos due to her because she is a woman – and it’s clear that both her mother and Lord Selwyn will see her dragged down the aisle sooner rather than later. And once married not only will her future as an engineer be lost – but so too will her connection with the children she has promised to protect.Like the first book in this series, this book was just fun. Fluffy? Yes. A little silly? Certainly. Not hugely deep? Perhaps so. But it was immense fun. It was a book you could happily lay back with and read cover to cover with a big smile on your face. It was fun, it was funny, it was light, it was interesting, it was a thoroughly enjoyable read.And the protagonist is excellent. Of course, part of that is for the social justice issues she fights and faces around class and sexism and her willful battle against the forces that oppress her. But ultimately, she’s excellent because she’s fun as well. She’s one of those protagonists you can really get behind. From the very first page you’re rooting for her, you’re on her side and cheering for her to succeed. When someone angers or offends her, you’re angry and offended on her behalf. When she wins you celebrate her victory. She carries you into the story which is the number one priority of any protagonist.The story itself is nicely put together. The pacing is great with no lags or down time and, similarly, no rushing, skipping or skimming. It was also intriguing and unpredictable, for so much of the book I didn’t know what Claire was going to do and why and didn’t predict her path or anything like the ending (which had some excellent twists to it). There was never a point when I wanted to put the book down and I resented any interruptions that pulled me away and, as I said, the story quickly got me emotionally invested.Read More
Tweet