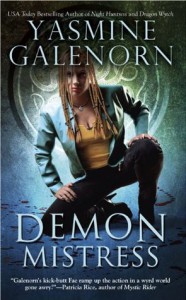 Menolly steps back up as protagonist in this book as the sisters come across an old potential crime while burrowing through the storerooms of the Wayfarer. Tracking down a missing elf from years ago isn’t easy, but is complicated by a missing vampire, a posse of undead, a friendly neighbourhood necromancer and his wandering ghouls, a demonic frat house who get exactly what they deserve and a whole new force of demons who fight on the astral planeIt’s a lot to juggle and, of course, behind it all is the politics from Otherworld and the eternal threat of Shadow Wing and his demons.Menolly also has relationships to balance – Nerissa is finding her time taxed with the puma council demanding she assume a political role; while Vanzir and Rozuriel both pursue Menolly, their demonic natures fitting powerfully well with Menolly’s vampirism.One of the main problems I’ve had with this series in the past is that it brings in a lot of extraneous issues, lots of side plots and lots of distractions that bogs down a very epic story – which is further exacerbated by the over-description, unnecessary recapping and constant talking everything through.So I was really happy that this book managed to avoid a lot of that. I think part of it is that the world is so huge now there’s a limit to how much recapping and reiteration you can actually do. Similarly most of the storylines and elements were pretty much relevant to the plot without too much in the way of distraction. The writing was more concise, there was no need to reiterate the battle order every time they fought, less random anecdotes from Iris, less putting the end of the world on hold so they could have a meal – it was tighter. There was still some side references that made things longer than they needed to be, but they were relevant side references to things like the fae queens or Iris’s personal life. The story was much more contained and moved at a much brisker pace with a far greater sense of both the urgency and the epic consequences they face.I wasn’t especially happy with how the story started, however. I can understand going after the astral demons since Delilah was targeted and people were dying. It was a nice reminder that, while Shadow Wing must be the priority, he’s not the only threat out there and they can’t focus on him when there are bodies on the ground. I can also understand Chase asking for information on the missing vampire from Menolly since she’s his vampire contact and it’s only a matter of asking questions. What I don’t understand is, with the ominous threat of Shadow Wing looming over them, they decided that it’d be great to search for an elf who may or may not have gone missing several years ago. Where’s the triage? Where’s the sense of priorities? I’m actually a little put out that it did all end up being related to Shadow Wing. Maybe it’s supposed to be a sense of how wide spread his power and influence is, but I felt it was a little “hey we got another spirit seal!” “How?” “Uh… we kind of stumbled over it, to be honest.” The story itself was great – fun, well written, well paced – but the beginning and end were shaky.I also think the friendly neighbourhood necromancer is really unnecessary in a cast that already has a rather large cast of characters. This is a wonderfully huge world with a massive, multi-layers epic storyline with so many factors and sides and forces that it always stands on the edge of becoming bloated.Of course, it’s that world and epic story that keeps me coming back to this series. The fae, the devas, the different realms of fae, the demons and their factions, humans, shapeshifters, vampires – I don’t think there are many worlds I’ve come across that are as rich as this series. And it’s not just the sheer number of supernaturals that are present, it’s how all these forces are relevant to the plot line. All of them have an influence and all of them have a stake – they’re not just mentioned in passing, they are integral parts of the storyRead More
Tweet