A Conspiracy of Alchemists (Chronicles of Light and Shadow #1) 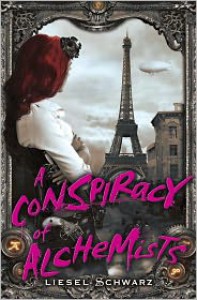 Though society would much prefer that Eleanor Chance to remain docile, akin to all women of good breeding, Eleanor refuses to live such a confined life. Having turned her back on a making a good match at her debut, Eleanor now supports herself as a dirigible pilot transferring freight. Things were going well for Eleanor until Patrice, an acquaintance, arranged for Eleanor to fly a small package from France to England, much to the distress of Mr. Hugh Marsh. From the moment Hugh and Eleanor meet there is clear tension between them, largely due to Marsh's sexist beliefs.It isn't long before Eleanor is drawn into a world of vampire, alchemists, fairies and warlocks. None of this is at all in alignment with her faith in science and everything rational. To make matters worse, her father has been kidnapped and Eleanor learns that despite all of her faith in science, she has been bestowed with a birthright which makes her the balance between light and shadow in the world. Can Eleanor put a stop the coming clash and make sense of the legacy bequeathed to her by her mother?A Conspiracy of Alchemists falls into the genre of historical steampunk. Like all steampunk, science and wonderful steam creations are central items in the story. Schwarz does a wonderful job with the setting and elements like a trip on The Orient Express add a great level of authenticity to the story. Throughout A Conspiracy of Alchemists, there is a consistent feeling of a world on the cusp of great advancement, as the rules surrounding gender and convention begin to shift. It makes it quite easy to see Eleanor Chance as a precursor to Amelia Earhart.Read More
Tweet