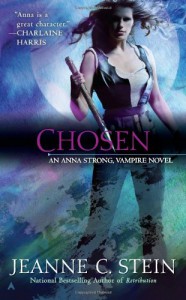 Since The Becoming, we have been told that Anna is the chosen one. It's taken Stein five books and less than a year in the time of the novel to finally go somewhere with this. Things are going fine for Anna until she decides to spend a weekend with her model/vampire lover Lance. The trouble begins when she shows up at a gathering and discovers that Lance's sire believes that she has been brought there as a gift for him, because of course she is the chosen one. Things get worse when Anna discovers that Underwood has partnered with her nemesis the former chief Williams. With Lance at risk, Anna is finally forced to agree to learn what it is to be The Chosen.This book had a lot of sex and mediocre action. I like that Anna says quite explicitly says that she loves having sex because to often, when it comes to women, there is a lot of shaming for enjoying sex. The problem is that for a good portion of the book, Anna is having sex and for a time, I wondered if I had accidentally stepped into a slightly less graphic Anita Blake book. The frequency of the sex felt like nothing more than filler, in large part because The Chosen is so short on plot.After spending five books building to the point of Anna becoming the chosen one, you would think that the climax would be epic but instead, it all just sort of fizzled out. The Chosen reads as nothing more than an opportunity to introduce two new antagonists, since Stein decided to unceremoniously get rid of Williams. Anna did however develop the ability to sniff evil (yes you read that ridiculous super power correctly) and walk through fire. If anything, this served to make the vampires in this series even more indestructible and ridiculous. I get that vampires can survive in the daylight but was it really necessary to have them sunning themselves in the desert? The vampires in this series seem to be vampires in name only.For the first time in the series, Stein gave us two women who Anna could tolerate. When Anna goes missing yet again, David brings Tracey Banker in as a new partner to the firm. Rather than alienate David, Anna is actually nice for change. There is also Lance's housekeeper Adele, who exists simply to serve. Just when I was starting to be relieved that finally Stein had bothered to include a female character Anna liked, the antagonist changed from Williams and Underwood to Judith Williams. I suppose we can't have too much female solidarity.Once again Stein wrote another book without GLBT inclusion. This however did not stop her from using anti-gay slurs.Read More
Tweet