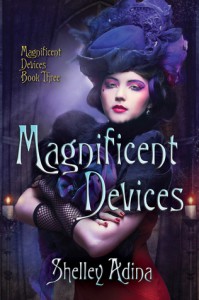 Lady Claire Trevelyan is making her way across the Atlantic to the Americans with her flock of adopted wards and Lord and Lady Dunsmuir; thereby escaping forced marriage to Lord Selwyn and his dastardly plotting.Unfortunately, they run into air pirates over the Americas and quickly find themselves at their mercy – and Claire’s little flock is separated. Ransoms are demanded and Claire and her charges must try to escape and reunite in a harsh, lawless, unforgiving land.And then Lord Selwyn rears his ugly head again. After his theft of the device he’s seeking to make his own nefarious deals in the Americas – but he hasn’t given up on Claire either and will use any scheme he can imagine to force her to marry him.Yet more excellent fun with Lady Claire! I love these characters, love this protagonist and love this world. Much of what I’ve said about the previous 2 books in the series applies here as well. These books are immense fun. They have a glorious Steampunk feel and aesthetic – including a perfect use of language and etiquette to get that ideal Victorian feel, and the immense humour potential that comes with it. There’s something so amazingly fun and funny about these so-very proper people being swashbuckling heroes.The setting is really vivid, it’s extremely well described without being a clumsily long winded and it’s very different from both London and the world we expected. Replacing the civilised, proper settings of the city for this rural, frontier near-wilderness was a big change but the book pulled it off magnificently.I think this book has a slightly darker, more serious cast than the previous ones. Because the flock is split up, Claire is frequently worried for the lives of her charges – which is a stark contrast to her usual worries and concerns in previous books. Their manoeuvring and adventures take on a much starker and more serious cast when you have missing children you care for, or when you are trying to face down a pirate who has frequently threatened to kill you. I think it’s good that the tone did become more serious because of that – the relationship between Claire and Jake, Tigg and the Mopsies is far too powerful and meaningful for menaces against them to be seen as light and funny.The writing maintained its perfect pacing though – the action kept moving forwards, the characters were still incredibly awesome and the fun was still there in immense quantities. The darker, more painful emotions fit into the story seamlessly, there was no jarring change of style nor did the author flounder with the different tone and the extremely different setting. Was it less fluffy? Yes, I think it was – but it was still immensely fun.And it’s still one of those books where you really feel for the characters – I can think of no greater testament to the realness of them than that. Reading this I was enraged on Claire’s behalf at her treatment by James Selwyn. It’s one of those books that is so well written that you feel for the characters – and share their outrage and their anger.Read More
Tweet