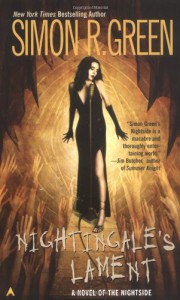 John Taylor has a new case – to rescue the Nightingale. A singer whose voice is so incredible she may be the next big thing in the Nightside where the incredible is the norm. A singer whose sad songs can literally cause people to kill themselves in grief – a fact that only adds to her popularity, not detract from it.And a singer who may be being held against her will. At least, that’s what her father thinks.Which sets John Taylor on track to speak to and free the Nightingale – but the Cavendishes, her handlers, managers or owners, guard their prize jealously and have the vast power and influence to ensure that even John Taylor can’t just walk in the front door and make demands. A chain of investigation follows, tracking down what the Cavendishes have done in the past, and discovering exactly what they have done to the Nightingale.To complicate things, John has upset the powers that be. A necessary act of revenge against the murderer of an old and valued friend has caused a large section of the Nightside to lose all power. The Authorities are not amused and wish to speak to John about it – and they’re quite insistant.I am rapidly becoming unstuck trying to review these books. It’s difficult because I don’t have a lot of praiseworthy things to say about them. But I love them.Which is a ridiculous contradiction, but it’s true.The story is good – very well paced, well written, extremely exciting and with very well done action scenes. There are no twists though, no surprises that can’t be guessed well ahead of time. It’s somewhat predictable, we know how it’s going to end, we know who the bad guys are, we even know their super super secret that was very obvious from the very beginning.Yet, it was good. It was predictable, I knew exactly how it was going to end – and it was still immense fun. Sometimes the journey doesn’t have to be surprising to be a fun one. It can still be exciting, still be fun of excellent fight scenes, still have some wonderful and enthralling settings and developments to keep you turning the pages. Even without twists and surprises, the story was compelling and enthralling. Even with the dramatic villain monologues – repeated dramatic villain monologues! In fact, it says a lot about the writing that it can make so many of these tropes that you shouldn’t ever do in writing work. Hard boiled film-noir-ish internal monologues allowing the protagonist to info dump? Yes we have lots of that – and it’s excellent and it works and I love it. Over the top villainous exposition “since I’m going to kill you anyway let me explain all my nefarious schemes!?” yes it’s there, lots of it – and it’s excellent and it works and I love it.The protagonist, John Taylor, is pretty hollow. He’s a power fantasy – super charged, stare-‘em-down, show everyone who’s boss, power fantasy. And he’s a really good one. It’s hard not to have a little fun with him staring down major powers, with everyone flinching at his name, with him avenging his friends no matter the cost and with him kicking an ogre in the balls. It’s fun, mindless, power fantasy fun. But fun nevertheless. Sometimes some simple mindless fun is exactly what the doctor ordered. I honestly can’t point to any real defining characteristic of John than this – he’s got a nebulous history, he has this whole hard-boiled-film-noir-stereotype thing and vast amounts of power and hardassery over the classic heart of gold. He’s a walking stereotype, he’s a cliché writ large – but I really like him.read more
Tweet