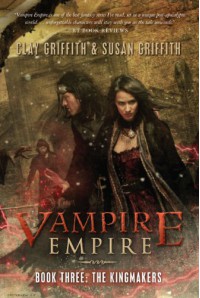 The war has begun, Equatoria’s armies are moving into Europe to reclaim their long lost lands from the vampire clans and free the herds of humanity reduced to squalor, enslavement and an early death.But the delay has been costly, it’s a winter campaign rather than summer when the heat makes the vampires sluggish, even with the best weapons at their disposal it’s clear the cost of lives is going to be extreme. Unless Empress Adele’s skills at geomancy can tip the scale and be their ultimate weapon – but at what cost?Of course, they could adopt the American tactic of slaughtering the humans and starving the vampires, but then, who are they liberating? And is it even right to commit genocide against the vampires, including their own children? Beset by these hard questions Adele also has to consider what future she has with Gareth, especially as Gareth looks to his own people and the potential of him taking Britain’s crown now his father is dead.The war has begun, but the questions of how to fight it, how to win it and the cost of it remain to be seen.A big epic showdown but it was so slow. I can’t even put my finger on exactly why it was slow, I think it was several elements. We had pages and pages devoted to single battles. Pages and pages to Adele’s angst over the Greyfriar and the difficulties in their relationship. Pages and pages of the Greyfriar’s own angst, pages and pages – actually pages and pages about everything. I think everything that happened and everything anyone felt in this book had to be accompanied by a rather long winded internal monologue.I don’t know if this has always been the style of this series because I don’t remember being frustrated by it before. But I think the problem here is that the book is reaching a culmination of epic. There’s a literal war going on. The Equatorian Empire has invaded southern Europe, they have armies in France and the Balkans, thousands of people are dying – and against that backdrop we have the Greyfriar, Gareth, cooking eggs for Adele. Was it a lovely scene? Yes, it was, it was cute and romantic and funny and endearing – but epic conflict is happening! At the beginning the war was front and centre, an epic battle, a grand conflict, a huge show down brewing, but then the rest of the book veered so very far away from it. It became a very personal book of Adele and Gareth – and it was a book very much about their emotional states and various other feelings.Many of these scenes weren’t bad – like Gareth visiting the King of Paris (a scene that ended up pretty irrelevant in the grand scheme of the novel), or, as I mentioned, Gareth cooking for Adele. Adele re-uniting with Morgana. Adele talking with Sanah. Anhalt sparring with Senator Clark. Senator Clark’s war in the US. They were all good scenes, albeit overly written with too much monologue, but they were great in their own right for character development and exploration and just plain fun with this world and these people who I enjoy. But they weren’t relevant to the plot – if they were removed the ending would be exactly the same as it was with them. Some of these scenes would have been wonderful to include and to underscore the difficulties the characters faced – Anhalt’s worry over Adele’s recklessness, Gareth and Adele worrying about the morality of the war, the difficulty of them having any kind of relationship and Adele becoming ever more isolated by the the necessities of state – but all of them together was just too much.read more
Tweet