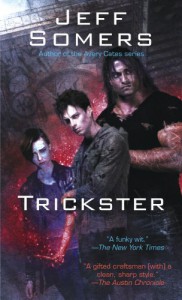 Lem is a trickster, which means that he uses his own blood to perform magic. This usually amounts to conning the non magical around him. He is always looking for the next big score but when he follows up on a tip, Lem ends up on the magical radar of an archmage, who is far more powerful than him. Suddenly, Lem finds himself in way over his head. The archmage is planning a massive spell for which much blood must be spilled but Lem's interference, which led to the escape of Claire, one of the intended victims, has put everything in jeopardy. Lem must now balance his need to stick to his magical morals and his desire to stay alive. Will he turn Claire over to save his life?I am going to admit that I didn't get very far in this book. After reading one hundred pages, in which women essentially were either whores or dead victims and Lem's sidekick person of colour reduced to a simpleton, I simply could not read another page. Though it is obvious that Claire's character is meant to evolve into something more, the treatment of the women who had appeared thus far in Trickster, simply didn't give me hope for a good portrayal. It felt like Claire was being set up to be a heroine that Lem saved. Lem said repeatedly that he is different from the other mages because he only uses his own blood. It's clear that this a moral choice but at least as far as I had read in Trickster, no explanation was offered. We were told repeatedly that Lem's way of life is extremely difficult and it is clear that he is barely surviving and so I could not help but wonder why he remained involved at all? Would it really have been that bad to get a job? I think that question needs to be answered, especially because Lem outright refused to go any further in his training despite being told he is capable of so much more than the cheap tricks he engages in to survive.Lem's side kick is Mags - an indigenous person. It's absolutely not original to have a person of colour reduced to a sidekick to a White protagonist. From Somers description, it's clear that Mags is meant to be viewed as neurologically atypical, yet throughout the book, he is described as a simpleton, who seems to be lucky be able to walk and chew gum at the same time. Throughout the novel, Mags is only praised for his strength and is continually attacked for his lack of intelligence. This is absolutely racist, abelist and offensive. In fact, Mags is essentially led around by Lem and seems to do his bidding like a helpless puppy.This novel has been described as gritty, but from my understanding, all that makes it so, are the dead women and the disgusting treatment of Mags. Lem is drawn as a sort of anti-hero, but there is nothing that about him that is even remotely compelling. His constant treatment of Mag made him unlikeable. Read more
Tweet