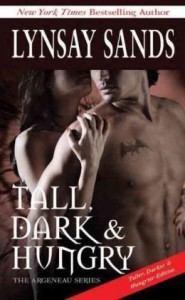 It seems that Sands has determined that all of the Argeneau siblings must simply meet their life partner and live happily ever after. With his father having died in a fire, Bastien is now the head of the family. He is the one that everyone calls when they are in a rough spot - the fixer of problems. Having had his heart broken years ago, Bastien has thrown his life into his work and has basically given up all pleasure in life, including eating and sex. When Kate, his sister-in-law to be foists her Terri on him when she flies in from England two weeks before the wedding between Kate and Lucian, Bastien graciously accepts having to share his NewYork penthouse. What he does not think about is how his habits have to change to deal with living with a woman who is not a vampire and does not have any idea that vampires even exist. Bastien feels an instant attraction to Terri and finds his jaded nature slipping away so that he can see the world through her eyes. For her part, Terri is cautiously guarding her heart. It's been many years since the young widow has been in a relationship and afters staying by her former husbands guide watching while he wasted away. Terri is scared to get close to anyone after watching both her mother and husband die slow painful deaths. At first, Terri is just attracted to Bastien and decides to enjoy the ride, but the more time they spend together, Terri realises that she is at risk of losing her heart.I like that Terri was absolutely forthright in all of her interactions. The problem is that Terri has a PHD but did not appear to be in least bit intellectual. Her trip with Bastien to the MET would have been a great time to let this show but instead, Sands was comfortable letting Bastien take the lead. The characters joke about how loud Terri is when she has sex, which is supposed to be an indicator that Terri is sexually liberated but liberated women say more than please during sex. They actively ask for what they want. Also her insecurity giving a blowjob wasn't endearing. Come on, it's not that hard and certainly not something one suddenly forgets how to do. It reads as just another gently used female love interest.Read More
Tweet