Bite Me If You Can (Argeneau Vampire Series #6) 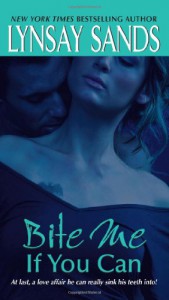 Leigh is walking home after closing down her bar when she is approached by a friend who she thought was missing. Unfortunately, he is not alone and brings his vampire sire with him. Donny's big plan is for Leigh to be turned by his sire so that the two of them can be together forever. Thankfully for Leigh, Lucian, one of the oldest vampires has been hunting down Morgan on behalf of the vampire council. He and his crew manage to save Leigh but Morgan escapes.Lucian has always been the grumpy old man of the Argeneau series. He is after all thousands of years old and one of the original Atlantians. Lucian is not prepared to deal with a baby vamp and sees Leigh as an intrusion on his time until he realises that he cannot read her mind. Those familiar with the series will recognize this as an indicator that Leigh and Lucian are life mates. While Leigh adapts pretty quickly to the idea that she is a vampire the life mate thing makes her very uncomfortable because she recently escaped a physically and emotionally abusive marriage. Lucian must convince Leigh to trust him and on top of that Morgan, the man who turned Leigh has decided that he is not done with her yet.As with other books in this series, Bite Me If You Can is really light and fluffy. Sands uses humor to keep the reader interested in the budding romance between Lucian and Leigh. As with all vampires, Lucian has given up food and sex and so the prospect of being intimate again worries him. He has no idea how to woo Leigh and so he heads to the bookstore and picks up the most ridiculous books to use as his guide. His younger family has to intervene to save him before he makes a complete ass of himself.Bite Me If You Can, is another in the series which is highly erased. There are no GLBT characters and once again an all White cast. I am particularly disturbed by the all straight characters because each book not only involves a romance but finding one's life mate. This suggests that forever love, or even love worth celebrating must only occur between straight people. All of the characters continually affirm the absolutely necessity of finding a life mate because it forestalls depression, anti-social behaviour and even insanity. If life mates only happen in heterosexual relationships and give such benefits, what does this say about same sex couples and the love they experience?Read More
Tweet