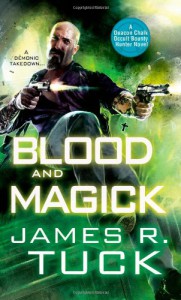 Deacon Chalk can’t even enjoy a quiet dinner out with his friends and loved ones without witches swooping in and ruining the meal.Witches are a pretty new one to face, especially witches as powerful of these, transforming demon witches, witches that raise the dead and witches that can kill with a word. And they have one target in mind – the Trinity, Sophia’s baby triplets. If they get them, they may have power enough to end the world.And Deacon Chalk faces conflict in his own inner circle as people close to him try to find their own solutions.There are elements this book that continue the improvement of the writing style we saw in the second book. It’s cleaner, the descriptions less inclined to be too overwrought and there’s less of the utter melodrama – the writing style is definitely improving.We’re also having a sense of meta-plot. Not just repeating characters and growing power on Deacon Chalk’s part, but the new connection with the government, Sophia’s 3 mystical children are definitely going to lead to more in the future.We have a lot of the women growing as well, Sophia is ferocious in defence of her children – yes, an old trope. But we also have Tiff growing into her own, becoming a capable and dangerous hunter in her own right and seeking her own place and own career in monster hunting in her own right. While, naturally, very much under Deacon Chalk’s shadow still – and certainly never in a position to challenge him (because no-one is ever allowed to do that ever – Kat tried in this book and is suitably punished for daring to question Deacon Chalk).We continue to have a diverse range of antagonists and powers suggesting the world is extremely broad which is always something I favour. The story itself isn’t complicated or difficult – being a rather linear “protect the prize, kill the enemies” with no great mystery or twists. The enemies are known pretty much from the beginning, what is needed to be cone is known from the beginning. What they’re after is pretty much known from the beginning. It’s another action-film type book, it’s there for fighting and action and adventure and taking hits and keeping moving and overcoming all the odds.All pretty good so far. And it was a book I couldn’t put down until I’d lost rather a lot of sleep – but not because I was enjoying it, but because I was angry at it – too angry to put it down in case it somehow managed to either redeem itself or damn itself thoroughly. And it damned itself.What broke me? Deacon Chalk is an arsehole. He’s a self-righteous, judgmental arsehole. He’s right, everyone else is wrong. It’s been growing through the books but this one was the straw that snapped the camel in two.When people argue with him he intimidates them. He beats his fists against tables, walls, cars. Even with people he’s supposed to love – Tiff presumes to argue with him and he’s slamming his huge fist into car roofs and walls and whatever. He threatens them – in the last book he’s threatened Charlotte, he threatens Larson, he’s threatened nearly everyone around him. He’s a huge man, we’re constantly told this, a leather clad massive man, a thug as he calls himself. He’s huge, he’s intimidating, he’s strong, he’s dangerous – and he uses that to force people to obey him. He’s a bully. He’s a violent, angry bully. Are we supposed to be impressed by what a big, hard man he is that he loses his temper and has tantrums unless everyone does everything his way without question?The one shred where him insisting everything go his way would make a fragment of sense if he actually had ANY kind of plans or even relevant experience of, well, any of the encounters we’ve seen in the book. But he doesn’t – his plan is constantly “show up and kill stuff”. That’s the fullest extent of his planning – he hopes he’ll think of something and, ta-da, by authorial fiat he comes up with something on the spur of the moment, usually after he’s had some dramatic “ugh, my rib has been cracked for the 11 thousandth time, oh it hurts but I’m so manly I’m going to keep going!” moment. They even make a joke of the fact he never ever has a plan – but everyone has to obey him and follow orders?The only reason this character isn’t a shining beacon if arseholery is because author will makes him right all the time. He is the ultimate Gary Stu, he is never wrong, he is never mistaken, his lack of plans never go wrong because he always comes up with just the right solution on the flyHe decides all magic is evil. Does he know all magic is evil? Have we any indication that he can be sure about this? It doesn’t matter – Deacon Chalk says it so he must be so.Read More
Tweet