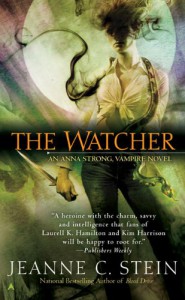 Anna is still adjusting to the fact that she has been turned into a vampire but that does not mean that the world has slowed down. She has gone back to work with David, chasing down bail jumpers and has taken on the role of a watcher - a vampire who polices other vampires at the behest of Williams - the chief of police. Anna still has to travel to Mexico to feed because she refuses to heed the advice of the shifter Culebra, Fray and Williams to get a human boyfriend to full fill her sustenance needs. Anna is determined master her vampire nature and stay in control.Unfortunately for Anna mastering control turns difficult when David her partner hints that their partnership should be dissolved and her long time boyfriend Max goes missing. When Anna approaches Williams, she learns that she has been completely left out of the loop about the real dangers occurring in the supernatural world, because he deems her untrustworthy, due to the fact she does not think through her actions sufficiently. After revealing her true nature in front of a father and daughter, when she intervened in a domestic violence situation, Williams sends her off to Mexico to disappear while he deals with the threat of a coven of witches who are attempting to raise a demon. What Williams does not realize is that his decision will actually put her on the front line. Anna now has to stop a demon killing vampire from rising, save her friend Culebra and her boyfriend Max.I wish I could say that this book was compelling, but the plot seemed to just limp along, with Anna falling into situations without being active. This would be bad enough for a regular protagonist, but it makes zero sense given that Anna tracks down fugitives for a living. This is now the third book in the series, and I have given up hope of actually seen her investigate anything. To make matters worse, Anna is prone to fits of spunky agency and Kellie independence.It's no longer enough to have an ass kicking female protagonist for a book to be pro woman. Anna is essentially surrounded by men. I suppose that Stein feels that because she is in a male dominated profession that this is appropriate, but it simply falls into the category of typical female representation. With the exception of her mother - who is referenced and does not actually appear in this book, Anna's interactions with women are all extremely antagonistic. David's girlfriend Gloria, has made an appearance in all three books thus far and her role is simply to be the jealous catty girlfriend who attacks Anna's performance and femininity at every turn. Essentially, this means that their only interaction is to fight over David.Read More
Tweet