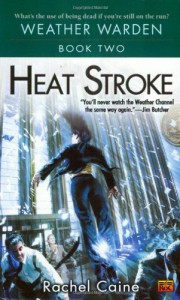 Joanne is now a djinn. Saved from certain death by David in the last book. She now has to learn the realities of her n ew life, with the new senses, the new body, the new powers and the sheer new world that comes with being a djinn, a creature of smoke, fire and pure energy.But things aren’t so simple – David has hurt himself creating Joanne and he is bleeding power into her. And there’s a whole hierarchy of djinn, including a virtual god who is very not happy with this – and has an ultimatum. Either Joanne learns how to sustain herself within a week, or he will destroy her to save David.And to make matters worse, there’s a rift into the demon realm – a rift that is producing sparks that seem to be doing odd things to the world – and the djinn. It has to be sealed and Lewis seems to think he knows how – but he needs a djinn to do it.Then there’s Yvette – a Warden out to bottle and capture some djinn. And a sadist who has her eyes on DavidI liked the story – we had major issues coming together. The frustration and need to escape as a djinn, the coming of age of learning ton be a djinn, the love story of David and Joanne and the mystery of the coldfire- it was a mix of genres without a simple box to put it in. I did feel it seemed to leap between several storylines and not know exactly where it was going –but it coalesced in the end. We had the coldfire, Joanne learning to be a djinn, the capture of Joanne and her ongoing relationship with David, all of which seemed to run vaguely parallel to each other but be rather separate – and it was a little frustrating because I rather wanted to just get on with one of them – any of them would do because I actually enjoyed them all. But they did all come together towards the end of the book, establishing one dominant storyline that had roots in all of them which was really rather nicely done. I still think I would have preferred a story that, say, focussed on Joanne being a djinn, but I still liked it and am impressed by how it was done. Especially since elements of the story felt superfluous at first, a distraction, btu then came back to be dominant near the end.Read More
Tweet