Cheat the Grave (Signs of the Zodiac Series #5) 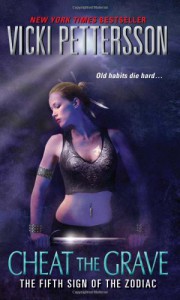 To be honest, I have been struggling with this series. It started off wonderfully engaging, with a world that was absolutely unique in urban fantasy, and then somewhere along the way, it seemed to lose focus, that is until Cheat the Grave. This book reminded me of why I fell in love with the Zodiac books to begin with.Now that Joanna/Olivia is mortal, the forces of light see her as useless, and to make matters worse, Solange has sent Mackie the piano player from Midheaven to kill her. If the Tulpa and the shadow hunters figure out who she really is, they will kill her. Everywhere she turns, someone wants her dead except for the rogue agents (the greys). Somehow she must protect the mortals she loves, and chief among her concerns is stopping Suzanne from marrying someone she suspects has nefarious intent.The fifth sign of the zodiac was filled with the world building that the last two books lacked. We learn more about why Hunter was such a threat to Warren, and a bit about Warren's motivations. He was still not painted as a sympathetic person, and in fact -- we understand even more clearly that he is no different from the Tulpa. Warren only saw himself as better, because he is fighting on the side of the Light, but if you are willing to sacrifice people, erase memories, and manipulate lives for a single minded purpose, does it really matter what the goal is?Cheat the Grave was far more introspective than any other book in the zodiac series thus far. It was masterfully written, and unlike many books in this genre, Olivia/Joanna continues to be likeable. Every angst filled emotion that she had was justified. Her entire life had been taken from her and when she finally felt that she was on secure footing, everything that she knew was ripped from her again. She was a woman trying to understand the world around her, and for the very first time not following orders but deciding for herself what her goals were and what would make her happy.This book was all about agency in it's truest sense. The Greys wanted the chance to settle down and not to be actively hunted by both sides and this determination caused Joanna/Olivia to understand that the binary approach to life i.e warriors of life vs Shadow warriors, was not really balance, and that it would not ever lead to real happiness.Read more
Tweet